“You’re not going up there without a lifeline, right?” This was the question from my overly paranoid bowhunting compadre. I patted him on the shoulder — a sarcastic look smeared across my face — and stepped up into the cottonwood.

I’d always considered myself a monkey. As a boy, I climbed trees, rocks, and anything that had enough texture and gripping points to allow me to go up. This came in handy when I started bowhunting whitetails. I was aggressive. I could get stands high in trees — even those gnarled cottonwoods that looked like a stand mission wasn’t possible. I was hanging stands for myself and my bowhunting brothers. Lots of them, and I loved it.

Not once did I wear a safety vest or lifeline. Why? The bowhunting industry had yet to produce them. I was still using a jerry-rigged waist strap to tie into the tree once I reached the platform. I never had an issue. Sure, I heard of guys and gals falling. I even attended the funeral of a buddy of a buddy who fell asleep in a tree, rocked forward, and broke his neck upon impact. Not good. For me, though, the danger didn’t register. So stupid! I was 22 years old and bullet-proof.

As more treestand accidents became more common, better equipment came about. In 2000, after Hunter Safety System co-founder John Wydner’s stand collapsed beneath him while hunting, he and his brother Jerry decided the tangled mess of webbing that most stands came with wasn't going to cut it. They weren’t comfortable, and most only fit certain body sizes.

The brothers went to the drawing board and started producing comfortable, adjustable safety belts that were highly functional and would fit an array of body types. The testimonials flooded in. The lives of bowhunters were being saved by these vests.

There was another serious issue, however, that needed to be addressed. According to recent data, 94 percent of bowhunters use some type of elevated platform when bowhunting. Of that 94 percent, only 33 percent admitted to always using a safety harness, and fewer, at the time of the survey, took advantage of possibly the most significant lifesaver the treestand goer can put in his/her arsenal — the lifeline.

As testimonials and reports flooded into Hunter Safety System and other safety harness manufacturers, an alarming trend emerged. It seemed about half of all treestand accidents happened while hunters were climbing into and stepping out of their stands. Some fell while ascending steps, sticks, and ladders. Most were wearing a vest, but the attachment tether of that vest was simply dangling in the air as there was nothing to attach it to.

Enter the Lifeline from HSS. Genius. After doing some research and taking a deep dive into treestand accident surveys, it was discovered the number of falls by hunters climbing into and out of their stand was well above 50 percent. The number was an alarming 86 percent. The Lifeline remedies this problem and takes nearly all the danger out of treestand hunting.

Capable of accommodating stands up to 30 feet, my go-to is the HSS Reflective Lifeline. The rope material is extremely durable and it’s reflective. Hit this rope with your headlamp and you know where your stand is. Not to mention the carabiner is covered in a cowbell-style rubberized sound dampener that prevents metal-on-metal clang. 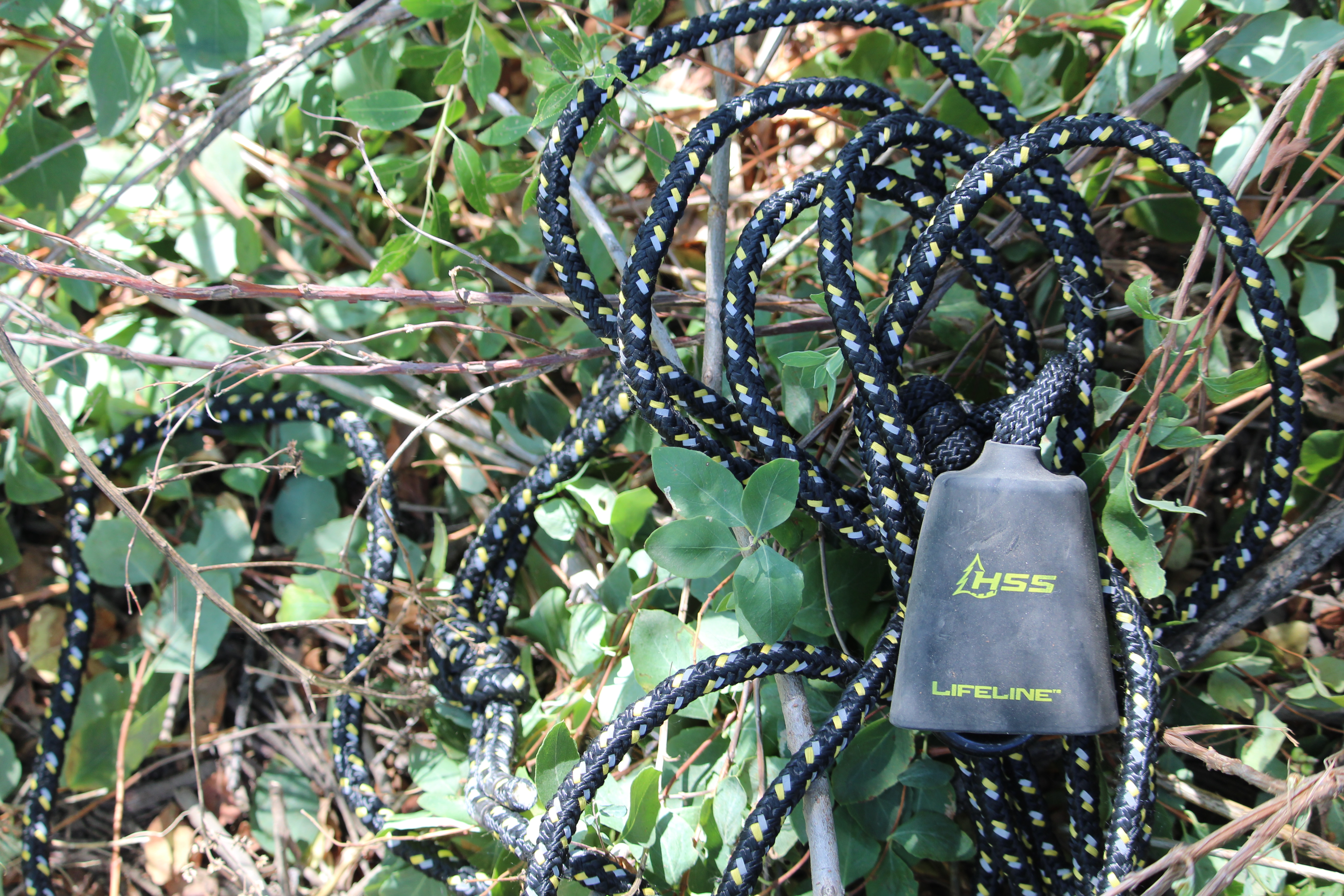 The process is simple. The second you leave the ground to hang a stick or step, strap yourself to the tree with a lineman’s strap. This strap comes with HSS and other safety vests. The strap is adjustable and has two loops at each end. I prefer to attach one loop of the lineman’s strap to the waist loop on my safety harness. The other loop can dangle, and when you’re ready, slip it around the trunk of the tree and attach it to the opposite waist-belt loop via a second carabiner. Now you’re attached to the tree and can work hands-free. Use the tail of the lineman's strap to adjust length and tightness. When it’s time to go up, simply loosen the strap, flip the strap up the tree and move up. Use the lineman’s belt until you get to where you plan to hang your stand. With the lineman’s belt still attached, take the lifeline from your pack and run the open-end of the line around the tree or large feeder branch. Then pass the open-end of the line through the looped-end. Note: You will have to slide the prusik knot through the loop as well. Where you position the anchor point of the line in the tree depends on you. I like the harness to sit just below my shoulder line when sitting down in a stand. Play with different positions to see what feels right to you. 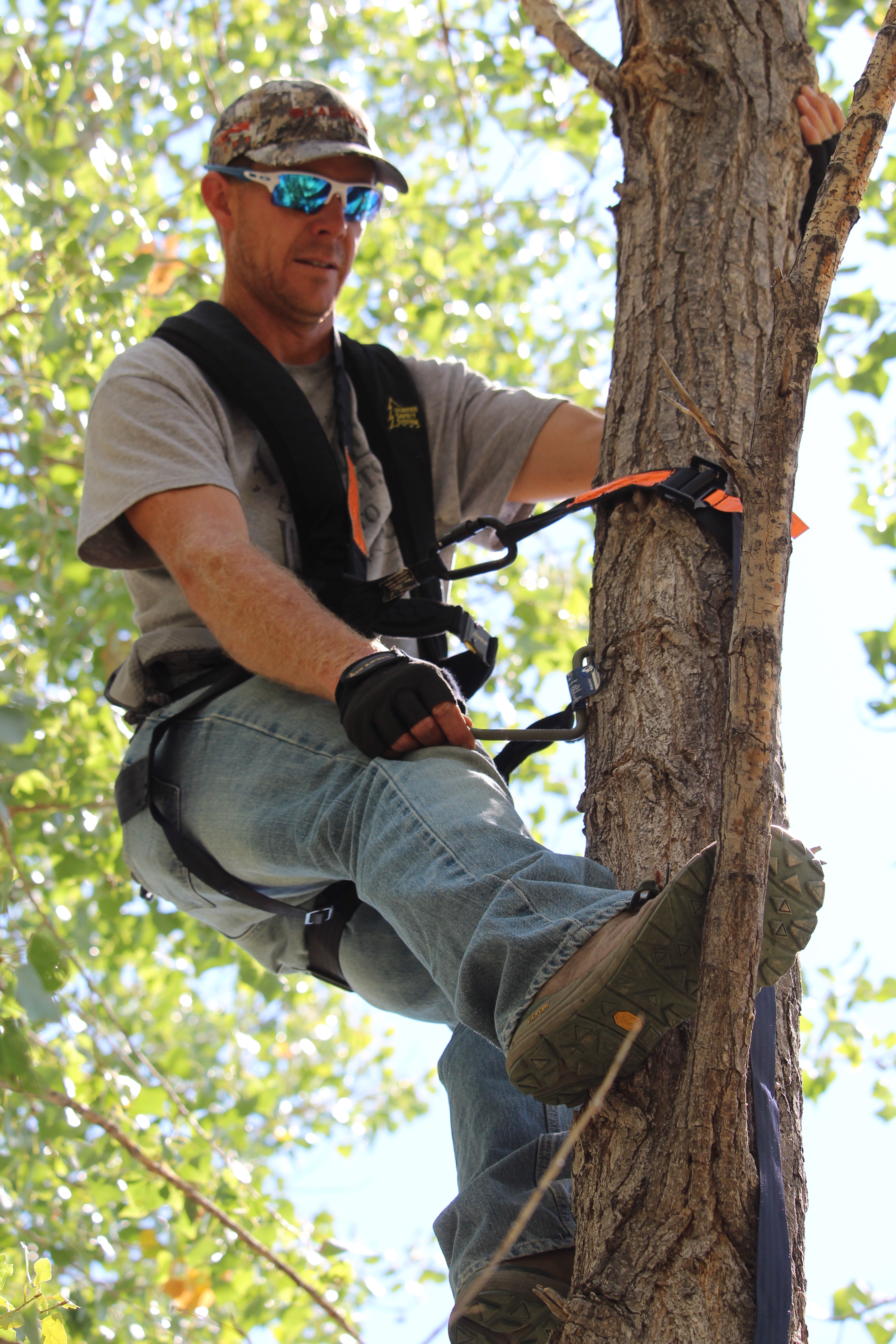 With the lifeline looped around the tree, hook your safety harness tether into the carabiner that has been added to the prusik knot. You can now safely remove your lineman's strap. You can now hang your stand. Feel free to use the lineman’s strap for double safety if the idea makes you feel more at ease.

Shortly after giving my buddy a sarcastic look, I fell. Thank God I was only about seven feet up, but I landed awkwardly. A severe ankle sprain and some bruised ribs were the results of my idiocy. Yes, the lifeline, harness, lineman’s strap, and the like are more to haul and will slow your stand-hanging missions slightly. Who cares? What matters is that you make it in and out of your stand safely, have a great hunt, and return home to your loved ones. If you leave the ground, strap in. It’s that simple.