It won’t be long now. Can you feel it? The doldrums of winter are starting to lift. The days are getting longer and thoughts of springtime butterballs wandering within bow range is jumping to the forefront of your brain. I get it. I’m a turkey nut. I’ve bowhunted birds from Colorado to Florida and just about everywhere in between. Most of my turkey sojourns are of the DIY nature, and over the years, I’ve amassed a number of tactics that usually stack the turkey deck in my favor.

Of course, nothing in bowhunting is ever guaranteed, and though turkeys have a brain about the size of a pea, they humble sage veterans on a regular basis. What’s to come isn’t Harry Potter’s magic wand. However, if you digest the intel and put it to practice, I can promise more fans will be bobbing over your shoulder in the coming months.

Whitetail hunters are masters of reading terrain, and those looking to skewer a spring noisemaker should take a play out of the whitetail playbook. Remember, toms strut, spit, and drum so hens can see and hear them. Boy birds are arrogant turds and expect the girls to come to them.

Whether I’m using a bow-mounted decoy or running and gunning with some Dave Smith fakes and a ground fort, I always try and close the distance on a gobbling bird. This, however, is easier said than done. Turkeys have incredible eyesight and amazing ears. Before making a move, pull up your location on onX or another digital mapping system that allows you to view the landscape in a hybrid mode. Hybrid mode, simply put, provides a 3D aerial image with topo lines. Drop a pin exactly where you believe the bird to be. Then, use this mode in combination with your optics to plan an approach that will keep you concealed as you close the distance. 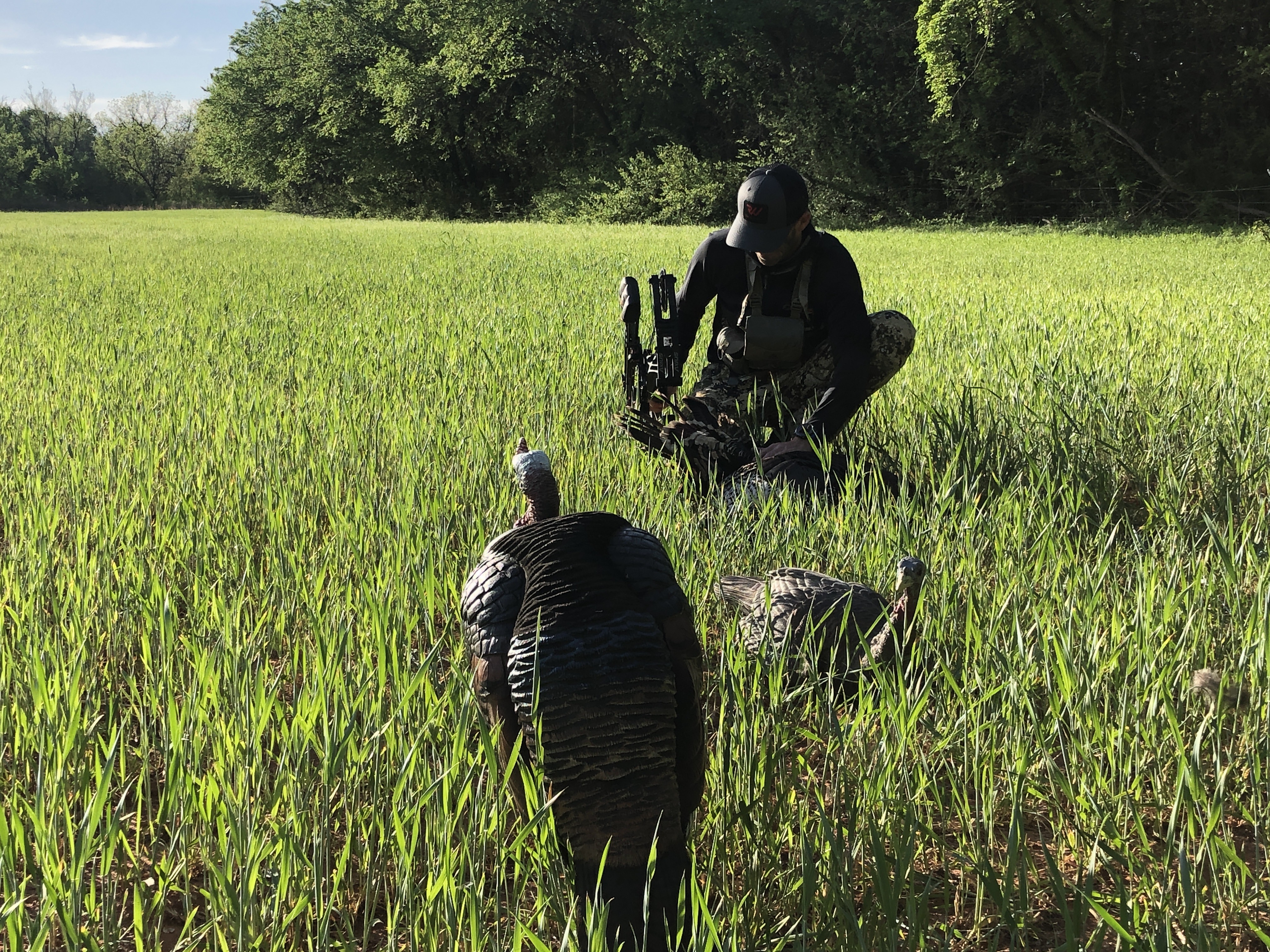 While approaching, keep an ear tuned. Much like a bull elk, unsuspecting toms will sound off regularly. How often depends greatly on the time of day and just how hot the bird is. Each time the bird gobbles, take note of your position, the position of the bird, and how far, if at all, the bird has moved. If the bird goes silent, don’t be afraid to check him. I like a locator call for this. Just be sure to stay away from predatory sounds like coyote howls. If you can get the bird to answer to an owl hoot or a crow call, you’re not tipping your hand. If you have to make turkey talk, let out a single two-note yelp. Don’t cut or get too aggressive. If you can’t get an answer and you’re out of cover or worried the bird may be coming in silent, stop and setup.

Remember, turkeys are vain creatures and will take the path of least resistance to you. In addition, boy birds will want to gain a visual. For this reason, I like calling birds up a ridge, small hill, or creek embankment. The less time they have to look at your fakes, the better.

While the curmudgeon amongst us may frown on this tactic, there’s nothing wrong with it, and it can be incredibly deadly. If you’ve hunted public turkey dirt long enough, you’ve seen this scenario more times than you can count. Piles of gobbling birds are strutting back and forth across a private ag field. You throw every trick in the book at them. You creep as close as possible, but you can’t compete with the live hens in the field and you can’t cross the fence. This is a common scenario, especially early in the season. The next time it happens, slip into nearby public-land timber midday. Use your online mapping system and setup within 100 yards of the property boundary. When multiple gobblers are in an area, many will break off the group and wander around during the late-morning and afternoon hours. This is especially true with younger birds. Slide into the timber, get set up, and start calling. The key is not getting too aggressive. Use light yelps—no cutting—and don’t be afraid to cluck and purr. Listen and stay patient. Often, a gobbler will sound off. When he does, don’t jump all over him. Hit him with a few soft yelps and wait. If he responds again, go quiet. Let him thunder on his own. When he does get aggressive, hit some excited yelps and cut a little. There’s a good chance this will send him on his way. 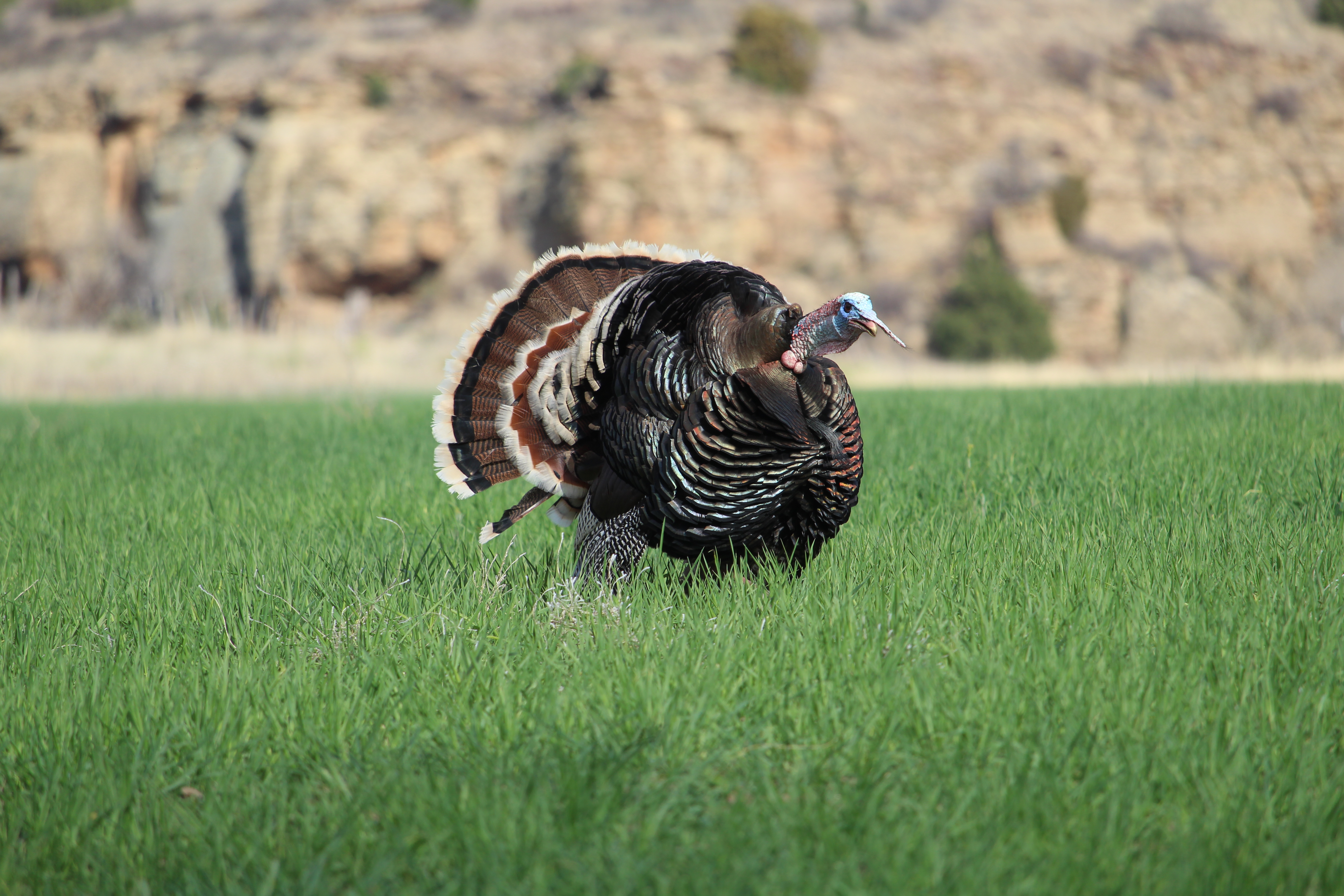 If you slip in and can’t get a bird to go, stay patient. Don’t pull the plug. Just because a bird doesn’t gobble doesn’t mean he’s not coming. Trust your calling and your setup. Many times,a boy bird will emerge like a ghost and come strutting in. Be sure of your shot. A well-hit turkey typically won’t go more than 20 or 30 yards. A poorly hit bird, however, can go a very long way. If this happens and you know he’s crossed onto private ground, always seek permission before taking up the trail.

I used to be scared of this tactic. I was worried I’d bump and scare birds, and honestly, I just didn’t have much faith in it. Now, I use this tactic more than the sit-and-wait method. Be sure to only go the bow-mounted route during bow-only seasons on public land, and if hunting private ground during shotgun season, I recommend going bow-mounted only if you’re certain you have the ground to yourself.

When using a bow-mounted fake, refer to tactic number one. Creep in close. The only difference is once you get close, you want to be seen. Remember, you’re the decoy. Use the available cover, and if possible, only show the tom or tom's bits and pieces of the decoy. I’ve found that if I can use a bit of sagebrush, tree trunk, or some other natural object to hide most of the decoy, birds are more apt to come close. Don’t be afraid to move your riser a little to give that decoy some movement. Be ready. Often, the bird will come on a dead run. This past spring, I shot a Colorado tom at three yards and when my hinge broke, the bird was still on a dead sprint.

Using this tactic allows those that get nauseous at the mere thought of hunkering in a ground blind for hours on end options, and it’s a tactic that’s highly effective.

Use these three tips this spring and put more longbeards on the ground.