Twenty-four years ago, I started chasing pronghorn across the cactus-dotted plains of Colorado with my stick and string. By some miracle, during my very first season, I harvest a not-too-bright buck. He was young, trying to rut, and I just made a move and got in front of him. Since that hunt, I’ve been fascinated with the pronghorn. A species all to themselves, the pronghorn is neither goat nor antelope. Its closest living relative is the giraffe. Look at the shape of the neck and face of both creatures. Do you see the resemblance? Pronghorn also lack dewclaws, just like a giraffe. The bottom line: pronghorn are amazing creatures and are so very unique.

One of my favorite ways to bowhunt these prairie speedsters is with a decoy. You've likely watched a show on outdoor television, YouTube, or some social media platform of a buck coming in at warp speed to an imposter buck decoy. Yes, this does happen, but it’s nowhere near as easy as it appears on your screen. The window for this type of decoy activity is short. To get this type of reaction, a buck’s testosterone level must be close to or at its peak. Prime decoy time, when a buck will charge from his herd with the intent to fight, in most locales where pronghorn roam, is from the 10th of September through the first week in October. September 15-20 seems to be primetime.

What Are You Looking For?

You’re not going to be able to take a blood test to measure testosterone levels, but what you can do is use your truck, UTV, or whatever, to find dust trails on the prairie. You see, the mission is quite simple: Cover dirt and look for bucks chasing does and other bucks. When you see chasing, testosterone is on the rise. If you watch a buck breed a doe in his harem, you know he's running at full tilt. If you witness a buck boil out of his herd to run off a pronghorn far enough away to be in another county, that buck will come to a decoy. It’s not hard to take a buck’s rut temperature. 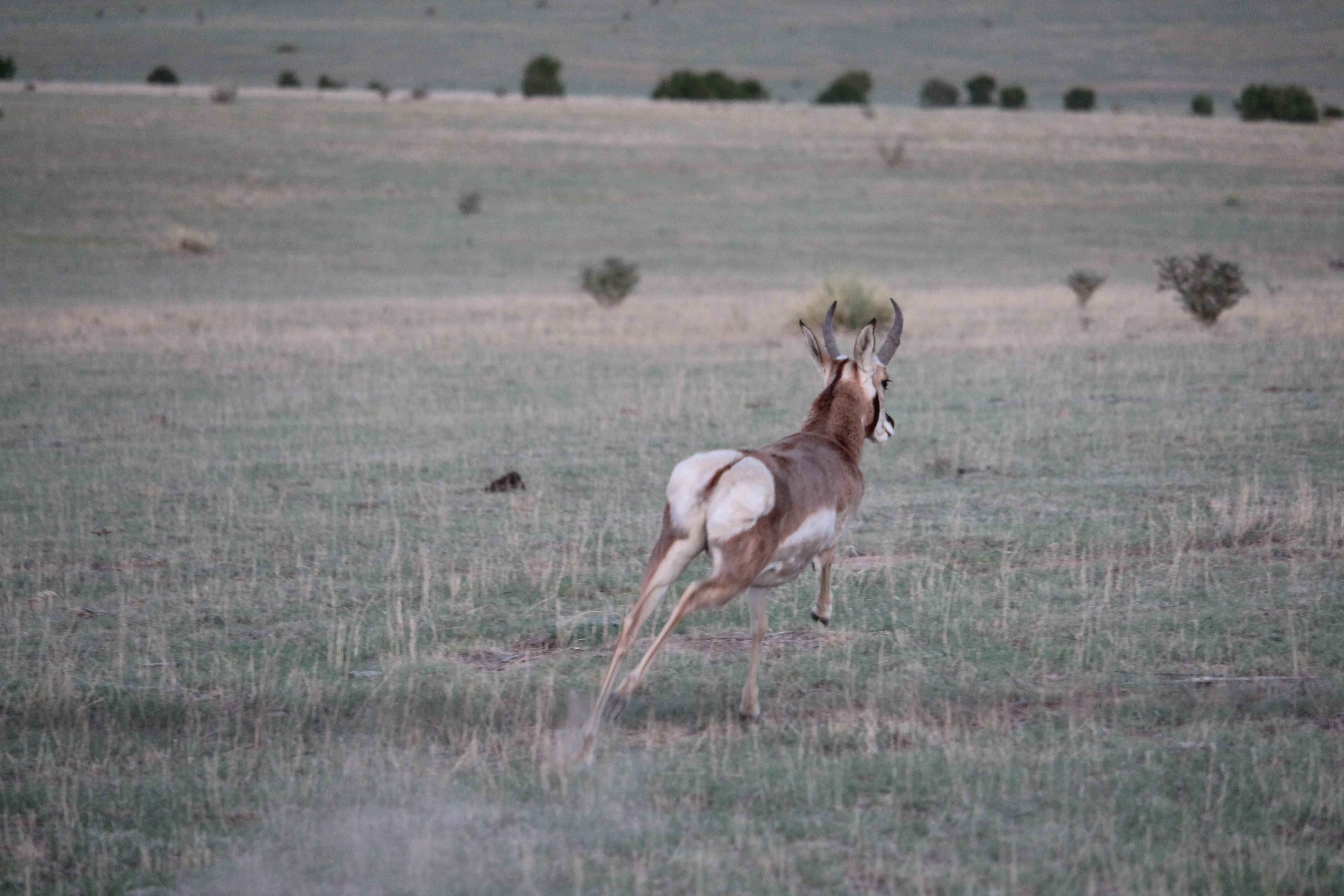 How Do I Decoy A Buck?

My favorite decoy tactic is to find a buck running off any challenger that wanders into their rut paradise. Your job is to stay patient. When the buck runs off his next opponent, and sometimes rut-ready bucks will run challengers for miles, make your move. Use the terrain to slip between where you believe the buck will come back from and his does. The key is not tipping your hand to the does, and not trying to get too close to the exact location you think the buck will return from. Your goal should be to set your decoy in a visible spot. If the buck’s drive to breed is raging, he won’t hesitate to come at full tilt the second he spies the new imposter.

As for what decoy to use, bow-mounted decoys have been my choice when hunting solo over the last few years. I’ve had great success with Ultimate Predator Gear’s Stalker Buck. I love the fact that it attaches to the bow and provides a shoot-through window. I’ve also had success with the pronghorn decoy from Heads Up. Both decoys can be challenging to handle when mounted to the bow with the wind blowing. If western winds are kicking, you can still use bow-mounted decoys, but you’re better off having a partner hold them.

I like to get my bow-mounted decoys behind some cover and only show approaching pronghorn bits and pieces of the decoy. Don’t be afraid to move your riser to create movement, and it’s never a bad idea to reach up with your hand and give a realistic ear flick.

If you have a partner, another great option is to use a 2-D or 3-D buck decoy. Both are hard to come by, and you don’t have many options to choose from when it comes to selection. My current go-to is Flambeau's MAD CommAndelope. The decoy is small but realistic, folds down for easy transport, and has a hole to range through. While your partner runs the 2- or 3-D buck decoy, you can sit back and off to one side with an Ultimate Predator Gear Pronghorn Doe attached to your bow. This setup is pure poison on a rutting buck. 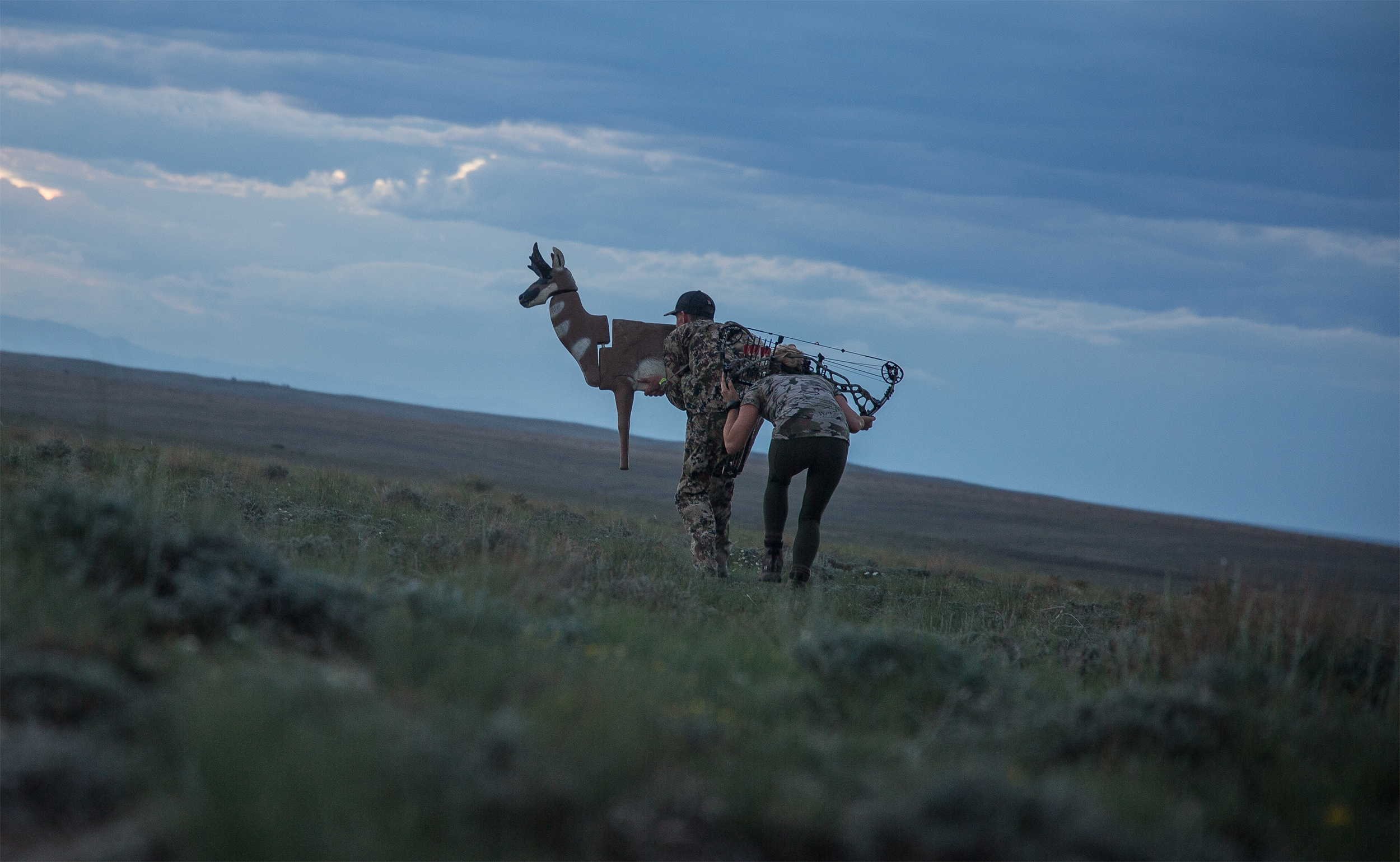 What If The Buck Is With Does?

If the buck you’re after is with does, and you’ve watched him get a little frisky with one or more of them, or you think it's time to give him a try, go for it. The key is not getting too close, surprising the herd with a decoy, and not being so far away that the buck will be reluctant to come if he’s not in the mood for a brawl.

Use the terrain to get within 250 yards of the bedded herd, but no closer than 150. Closer is better, but again, there is such a thing as too tight. I’ve pushed the decoy envelope enough times. I feel confident telling you that. If the buck is on the backside of his does, that’s even better. He should feel more threatened by your decoy and want to respond. However, if he isn’t toward the back of the does, it isn’t a deal-breaker. If you’ve done your job and got close, go ahead and show the buck the fake and see what happens. You never know how a big buck will react unless you allow him to do so.

He’s Not There Yet. Now What?

Pronghorn can be decoyed at any point during the season. The problem is most bowhunters expect that mature bucks will always come out of sheer aggression. This isn’t the case when testosterone levels are low. Bucks will approach a decoy, but it will be out of curiosity, and the approach will be much different.

Your best bet when hunting not-ready-to-rut bucks is to use a 2-D or 3-D decoy in tandem with a bow-mounted fake. Pay attention to where area pronghorn like to roam and set up in one of these locations in the dark. A pair of decoys positioned in a location where bucks and does want to be is a good recipe for success. You must stay patient and don’t expect an intense reaction. Sometimes, bucks and does will ignore your presence for hours, and then, for whatever reason, one or more of them will wander in. 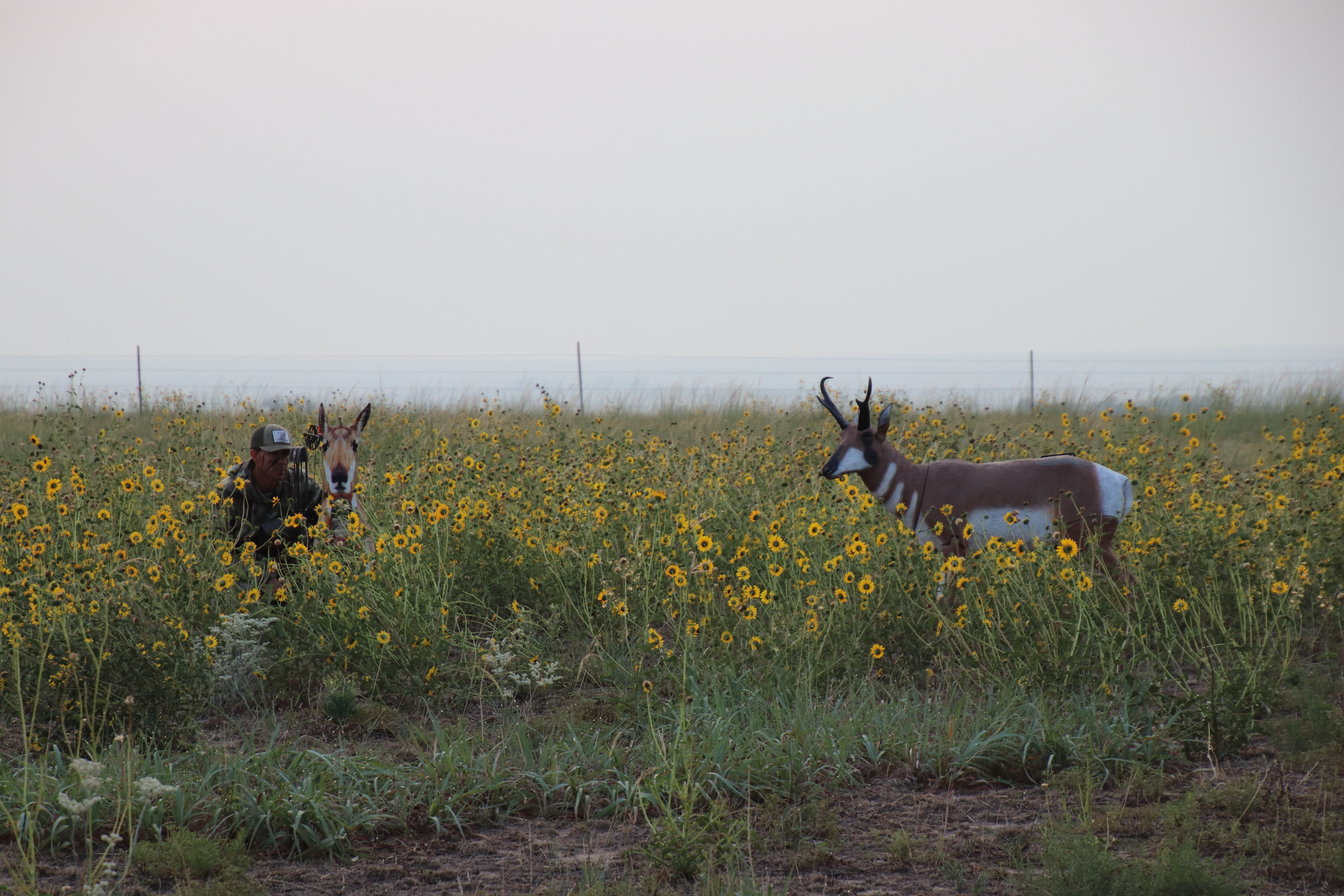 This wander-in process usually takes time. Stay relaxed and stay patient. Remember, you’re part of the decoy setup, so don’t be afraid to create some movement. Have a white shirt in your pack, toss it on, and crawl around a little with our bow-mounted decoy.

Enjoy the decoy process. It can be very frustrating one day, and the next, it can seem like the decoys possess magic power. Stay after it, and you’ll get a buck to commit.