Tricks of the trade to help you take your next turkey with a bow.

Any critter that answers a call and screams here I come, here I come, before you actually lay eyes on it, is capable of melting even the most seasoned bowhunter’s mettle. The interaction between hunter and prey is what makes hunting turkeys so special. But when you make the decision to hunt them with a bow, you add a whole new level of anticipation and excitement! Success seldom comes by simply convincing a tom to make an appearance. When bowhunting, you must call them in ultra-close, waiting for just the right moment draw your bow and make an accurate shot at a small, shifty target. 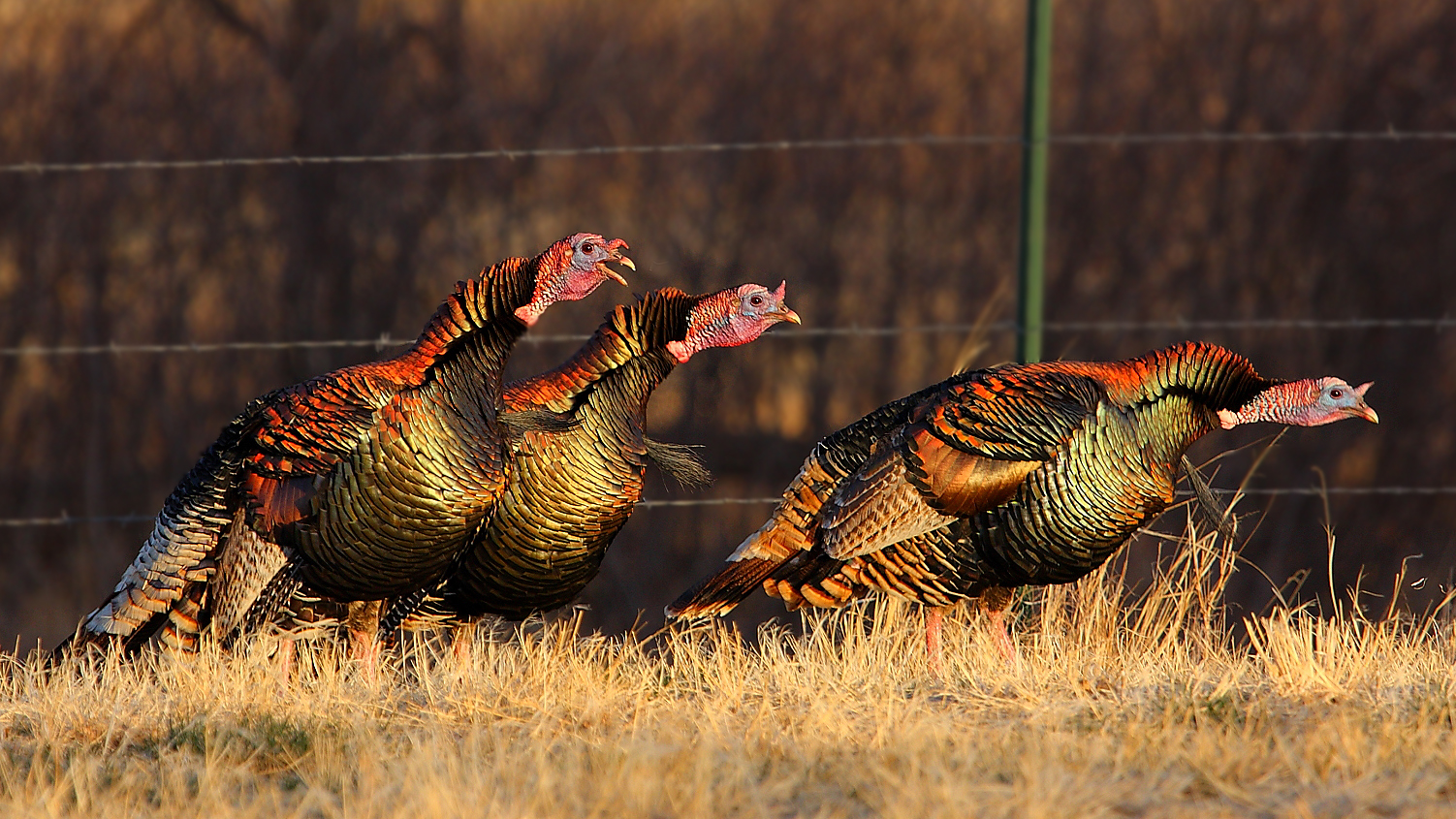 The spring of 2003 was when I first decided to leave my shotgun at home and try and take my first gobbler with a bow. I had no intentions of making a long-term transition, I just wanted to say I had done it. It took almost the entire season, but I finally managed to arrow a nice tom, and since doing so, my old turkey cannon has remained in the gun safe.

Over the years I have either made, or seen by buddies make, just about every mistake in the book. It’s taken a long time, but I’ve learned a thing or two that have certainly helped me become more successful. Try a few of these tricks to maximize your chances of filling your next turkey tag with your bow.

Hard bones, heavy feathers and a relatively lightweight body combine to make turkeys surprisingly difficult to penetrate with an arrow. I compare it to holding a two-by-four upright in your hand and trying to sink a nail into it with a hammer. When you strike the nail, the board gives in your hand and the energy doesn’t fully transfer, making it nearly impossible to sink the nail. Likewise, when you hit bone or a pile of tough feathers with an arrow, the lightweight mass of a turkey often gives, robbing your arrow of kinetic energy and thus causing you to lose penetration.

Some manufacturers produce “turkey broadheads” that are actually designed to impede penetration. Using this style of broadhead is a mistake! Even with a sharp broadhead specifically designed for deep penetration, you still seldom blow completely through a turkey. I have seen birds that appeared to be hit perfectly with these penetration-halting turkey heads, that ran off because the arrow nocked them clean off their feet and achieved little-if-any penetration.

My advice ­– shoot a sharp mechanical with a wide cutting diameter. The same popular mechanicals many bowhunters use for deer. While the wide cutting diameter might not improve penetration issues, it doesn’t halt it either. What it does do is cut a huge hole that turkeys have a very difficult time dealing with. In 2006 I switched to using a 2-inch Rage for bowhunting turkeys and my recovery rate has been fantastic ever since. 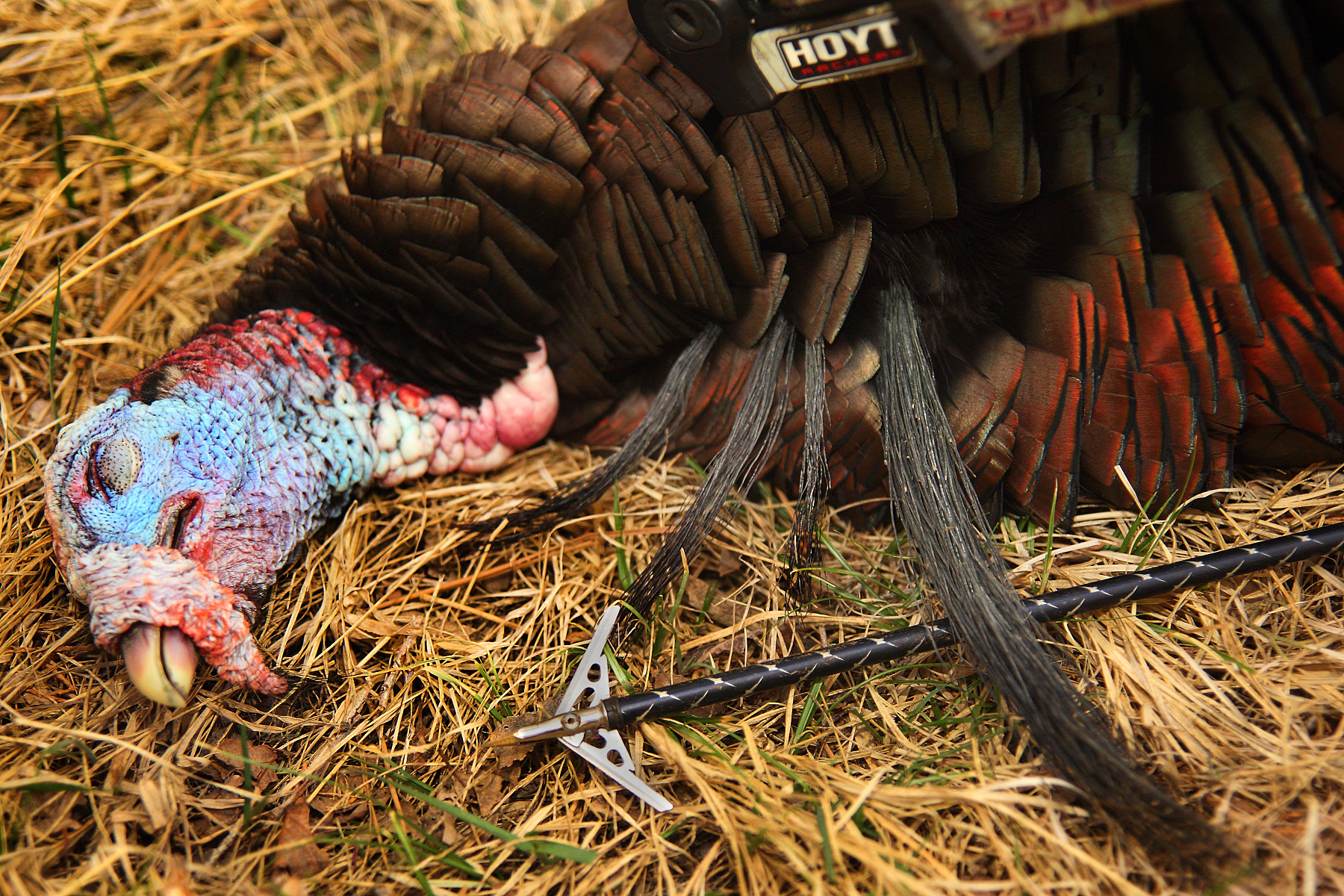 When it comes to choosing a broadhead for turkeys, you can’t go wrong with a sharp mechanical with a wide cutting diameter.

I’ve often heard it said that if turkeys could smell, we’d never kill them, and that might be true. Thank goodness they can’t smell, because their eyesight is ridiculous. They can see nearly 300-degrees around them without even turning their head, so getting drawn on turkeys can be tough. You absolutely need to minimize the amount of movement necessary to draw your bow.

To do this, adjust your bow to a draw-weight that allows you to point your bow at the target and draw the string straight back at a slow even speed, without ever moving your bow arm. If you can do that standing up, go ahead sit down flat on your butt and try it again. If you have to move your bow arm to get to full draw, dial it down some more. Once you get to a weight where you can draw your bow straight back in a slow fluid motion, regardless of your shooing position, you’ve found your draw-weight for bowhunting turkeys. 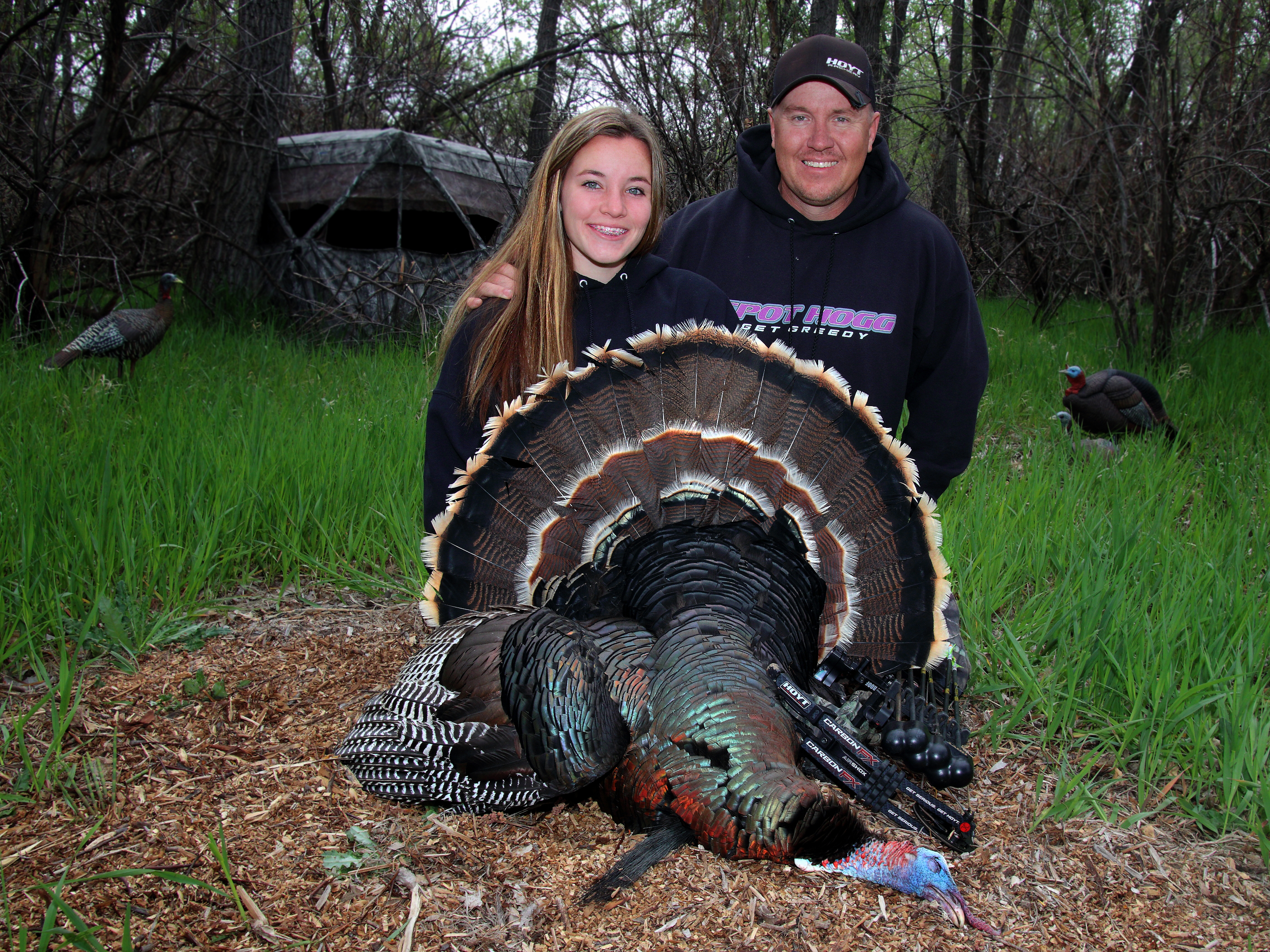 The ability to draw your bow in one slow and controlled motion is an absolute necessity. This big tom knew something was up and was staring right at the blind. Danny’s daughter, Baylee, had to draw in super-slow motion to keep the bird from spooking.

LEARN TO USE A MOUTH CALL

While many veteran turkey hunters who spend lots of time with a shotgun in their lap have mastered the art of using a mouth call, I’m surprised by how many turkey bowhunters have not. Perhaps it is due to the fact that bowhunters often hunt turkeys from ground blinds, and thus feel they can get away with the movement required to run a hand call. While it is true that a ground blind can conceal those movements, at some point you must drop your call and fill both hands to prepare for the shot. The ability to continue calling in a hands-free fashion is absolutely vital.

Experiment with different mouth calls and you will find that some fit you and some don’t. When you find the right one, you’ll know it. Learn as many turkey vocalizations as possible, but really focus on soft contentment calls like clucks and purrs. These are the calls that come in handy when convincing a tom to take a few more steps so you can seal the deal.

BE MOBILE WITH A GROUND BLIND

As mentioned previously, a turkey’s eyes are its primary defense, and drawing a bow within close range of an animal that can see almost everything without even turning its head can be very difficult. Many turkey bowhunters use ground blinds to help conceal movement, but many also think using a blind eliminates any real ability to be mobile. Not true!

Most modern portable ground blinds can be set up and taken down very quickly, but it does require practice. This doesn’t mean you can simply go out in the yard, pop the blind up a couple of times and call it good. There is more to it than that. With most blinds, you should be able to pop it up, arrange your gear and be ready to shoot in about 60 seconds. This will allow you to run-n-gun so to speak, covering ground calling and listening for gobbles, and then to set the blind up quickly once you find a tom willing to play.

It can be a challenge to keep all your gear organized while carrying a blind through hill and dale looking for turkeys. I have relied on several backpacks to do so over the years. My favorites for carrying blinds have been bat-wing style packs like the Badlands 2200, but there are many mid-sized hunting packs that fit the bill nicely.

Find a pack that allows you to organize and carry your blind, chairs, bow, calls, decoys, and whatever other necessities you can think of, then start practicing. With all of your gear on your back, see how quickly you can drop the pack, deploy your decoys, set up the blind, organize your tackle and then be ready to call and shoot. As you practice, you will find ways to refine your system.

Staying mobile while bowhunting from a ground blind can be a daunting task, however, if you spend some time developing a mobile system, you will definitely kill more turkeys with your bow. 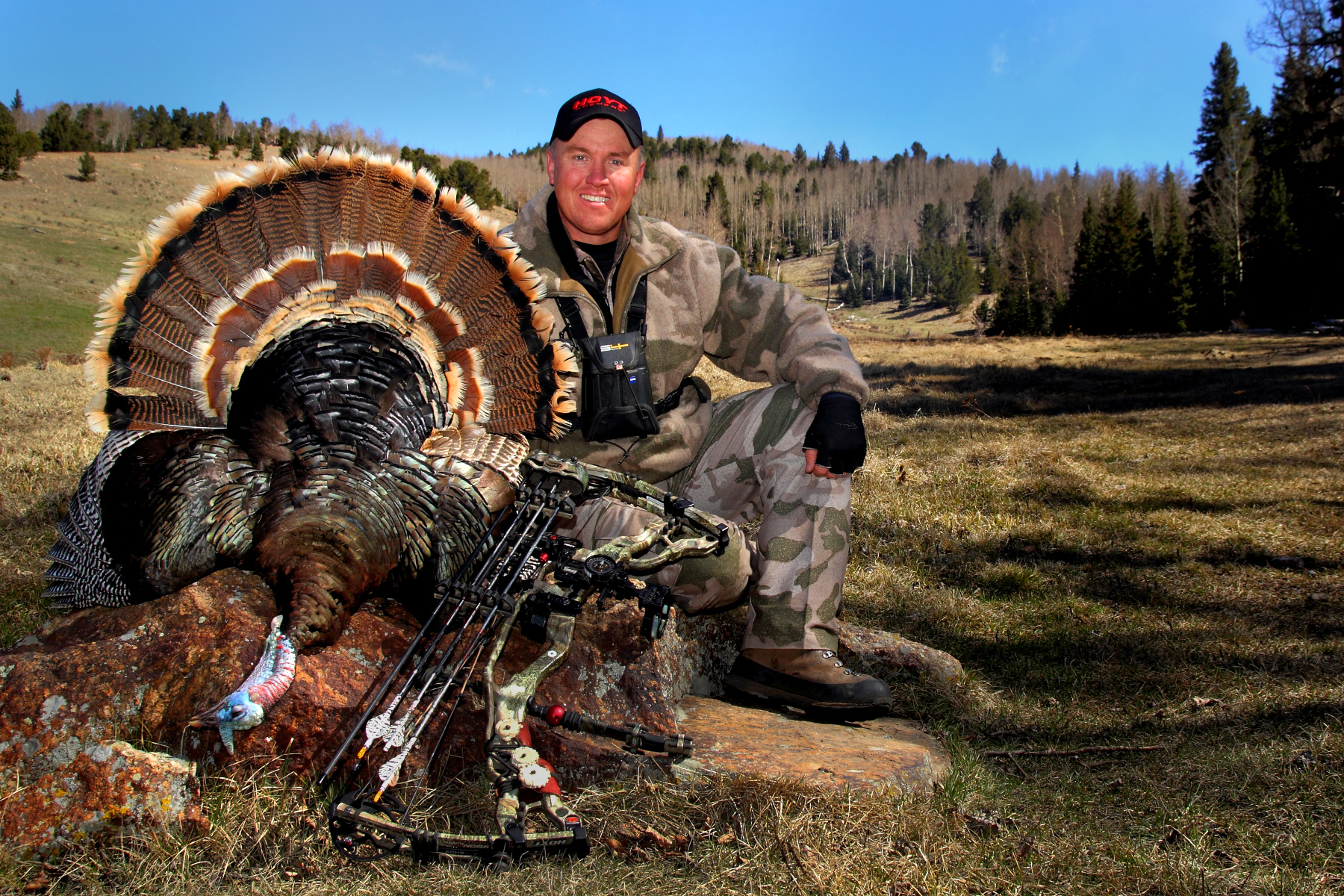 Danny took this beautiful high-country Merriam’s gobbler by running and gunning with a ground blind. Covering ground and calling from ridge-to-ridge eventually resulted in a response, allowing Danny to get in position with his blind and call the bird within bow range.

ADD ACTION TO YOUR DECOYS

Many bowhunters have been frustrated by toms that come to their calls, only to get nervous after seeing a blind and then hanging up when their decoys aren’t acting quite right. Using a decoy that incorporates lifelike motion can keep gobblers from hanging up as they approach. My first motion decoy was a jake I modified with an old fan and some fishing line. As I pulled on the line, the fan would rise and fall like a tom strutting for a hen. Many-a-gobbler fell to that decoy over the years, and my success rates definitely increased once I started using it. Today, realistic motion decoys like the B-Mobile from Primos, or the Wind Drifter Series from Ultimate Predator Gear are readily available. They are much more realistic than my crude homemade model and are capable of catching attention from great distances. A little movement provides extra realism that will keep toms from freezing up. 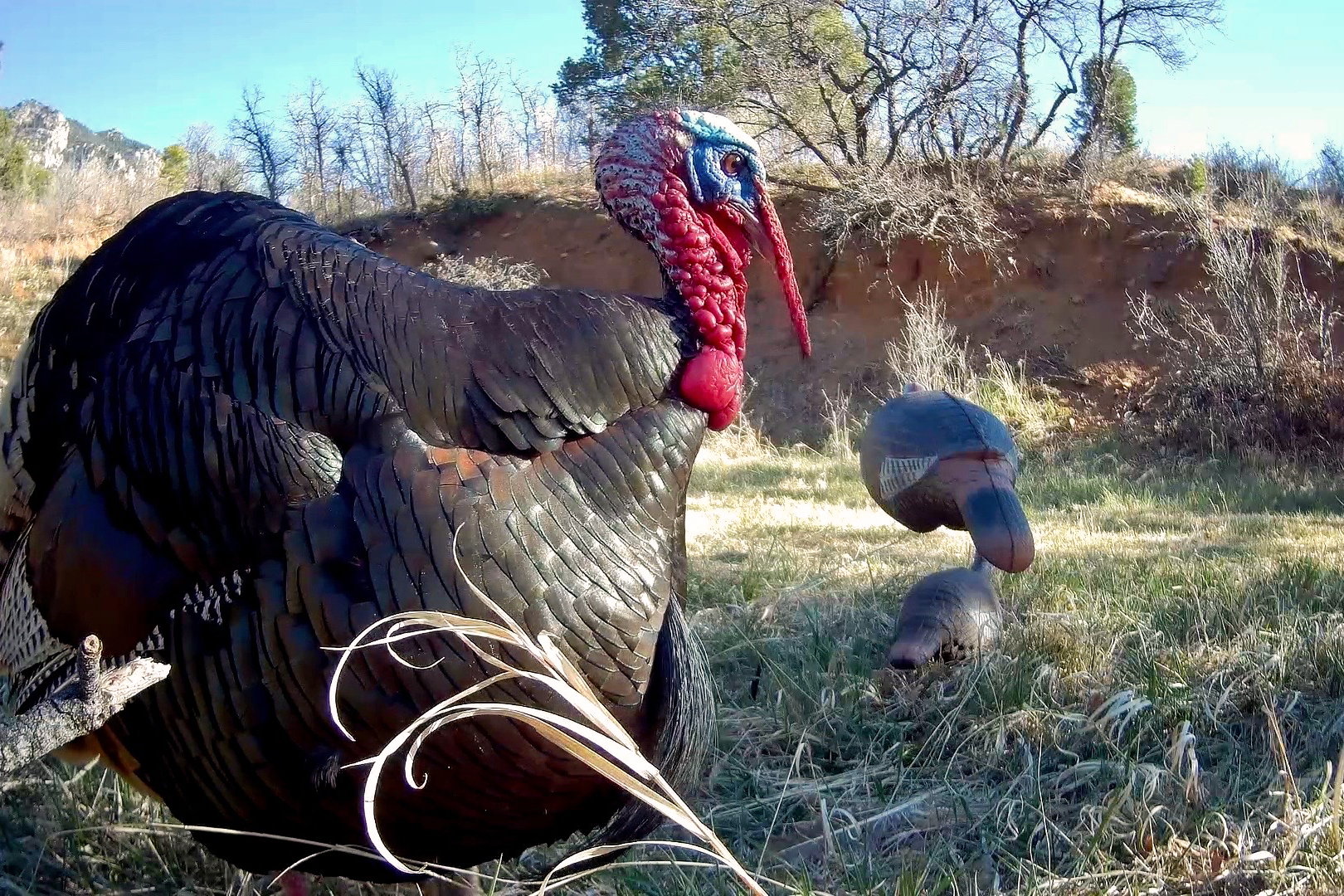 Decoys that feature realistic movement can help keep gobblers from hanging up. This tom was totally fooled by the wind-driven movement of these Wind Drifter Decoys from Ultimate Predator.

DON’T BE AFRAID TO GO WITHOUT A BLIND

Most turkeys are not blind shy by nature, however, some of those hens have been around for a few years and have seen bad things happen around ground blinds, and some of my most exciting hunts have taken place without a ground blind. Last year I arrowed a big boss gobbler at 5-yards as he charged my bow-mounted Stalker Decoy. The Stalker is a lightweight, collapsible decoy that mounts on the front of any bow and basically allows you to become one of the decoys in your set! You have probably seen some exciting turkey reaping videos where hunters use a turkey fan or a gun-mounted decoy to draw toms into point-blank range. Well, this is the product that allows you to do the same thing with your bow! Be safe and use common sense when using this type of decoy, but don’t underestimate its effectiveness. It might just be the most exciting way to bowhunt turkeys! 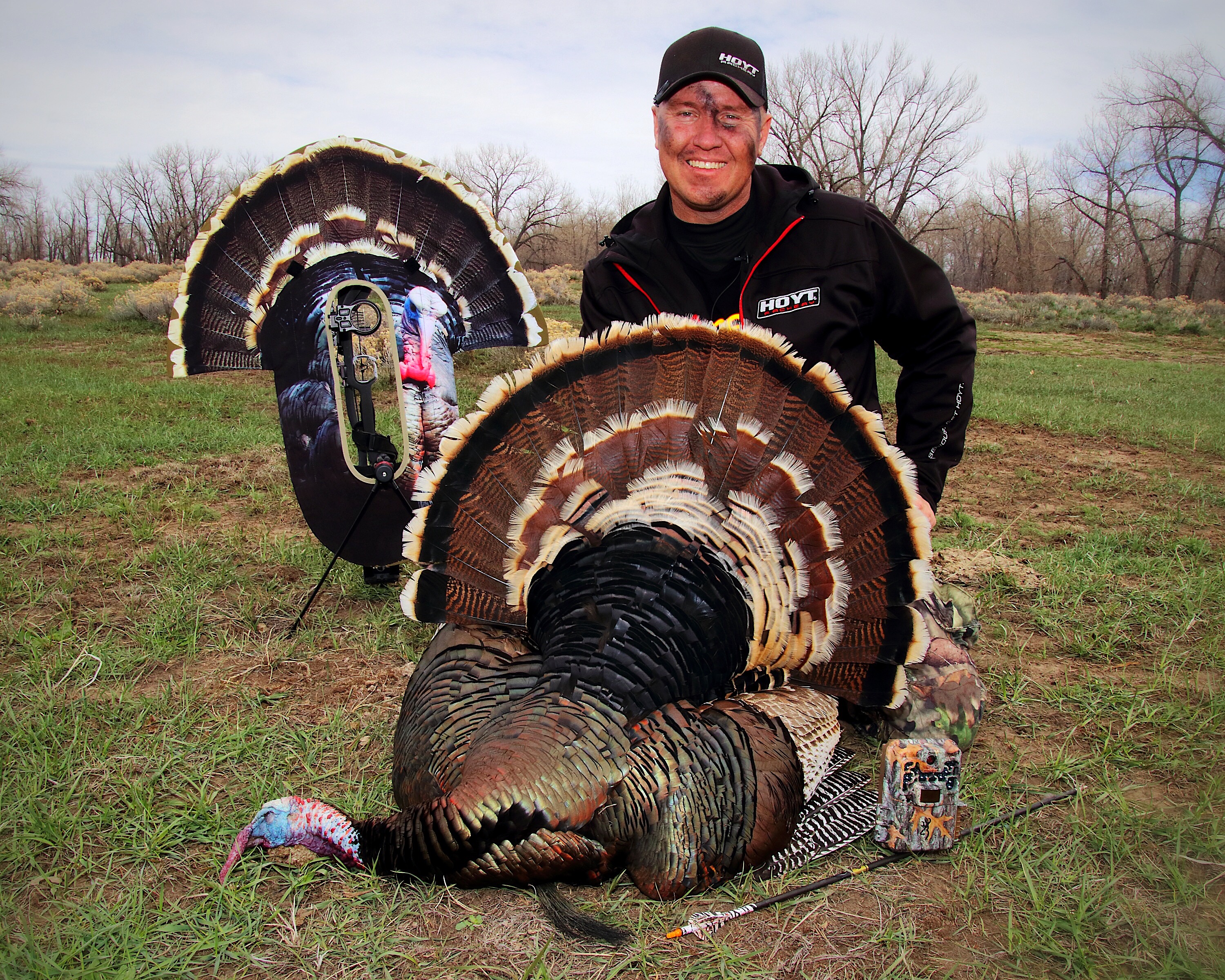 Danny left the ground blind at home and used a Stalker Decoy from Ultimate Predator to take this big gobbler at just 5-steps!

My final piece of advice is to make sure you fully understand where to aim when shooting a turkey with a bow. A gobbler’s outward appearance morphs as he goes from feeding, to upright and strutting positions, and it can be incredibly difficult to tell where inside all of those feathers their softball-sized vitals actually are. 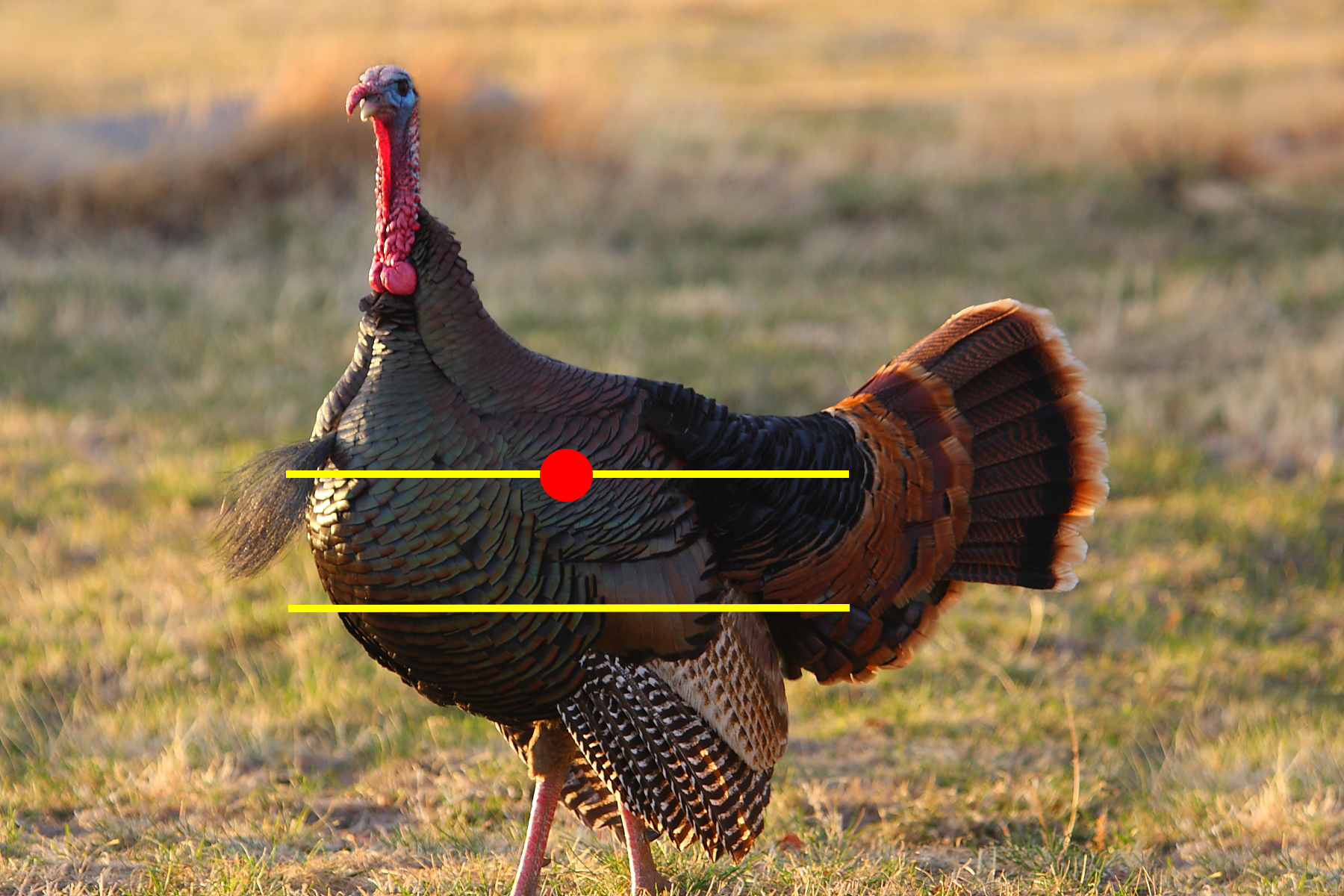 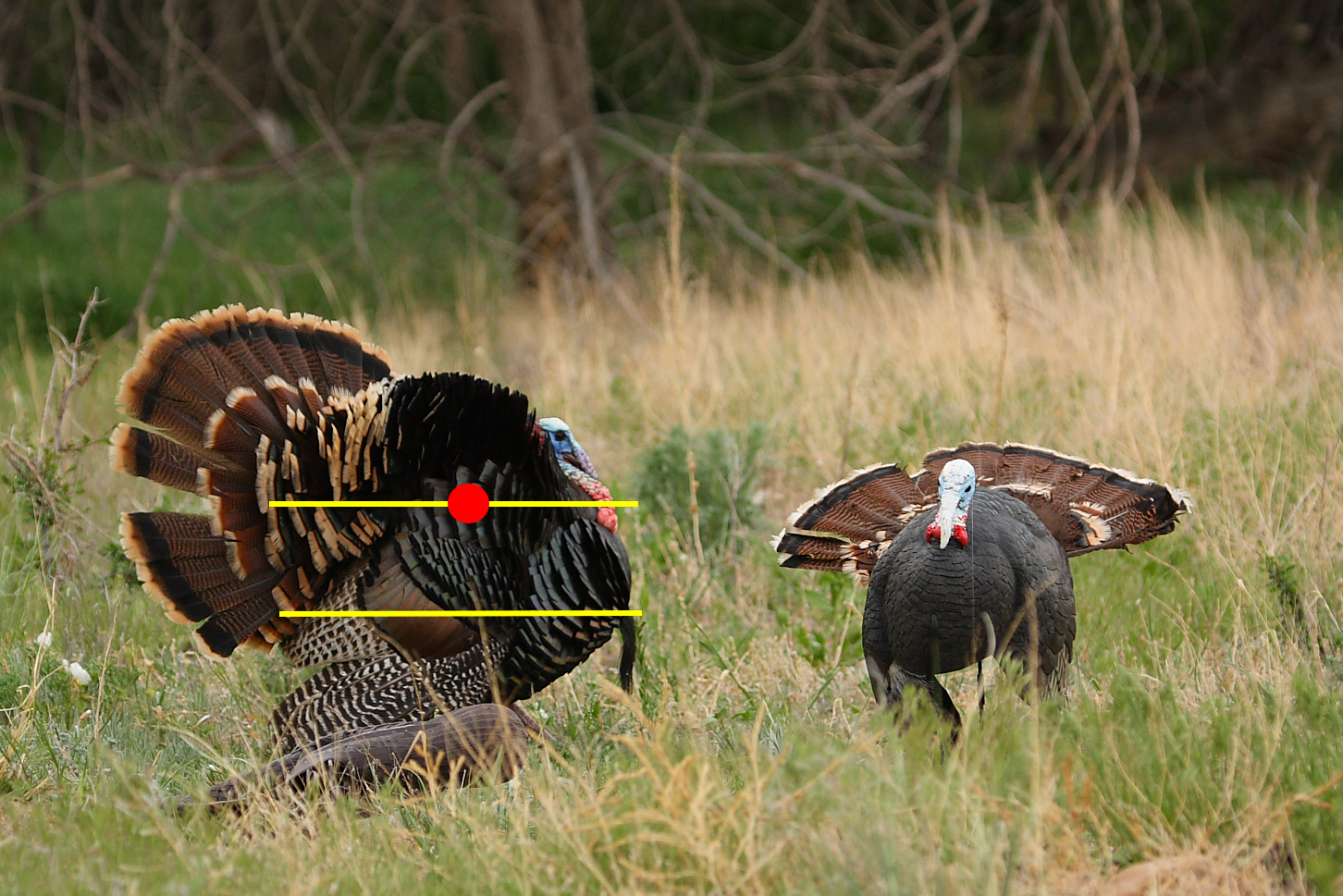 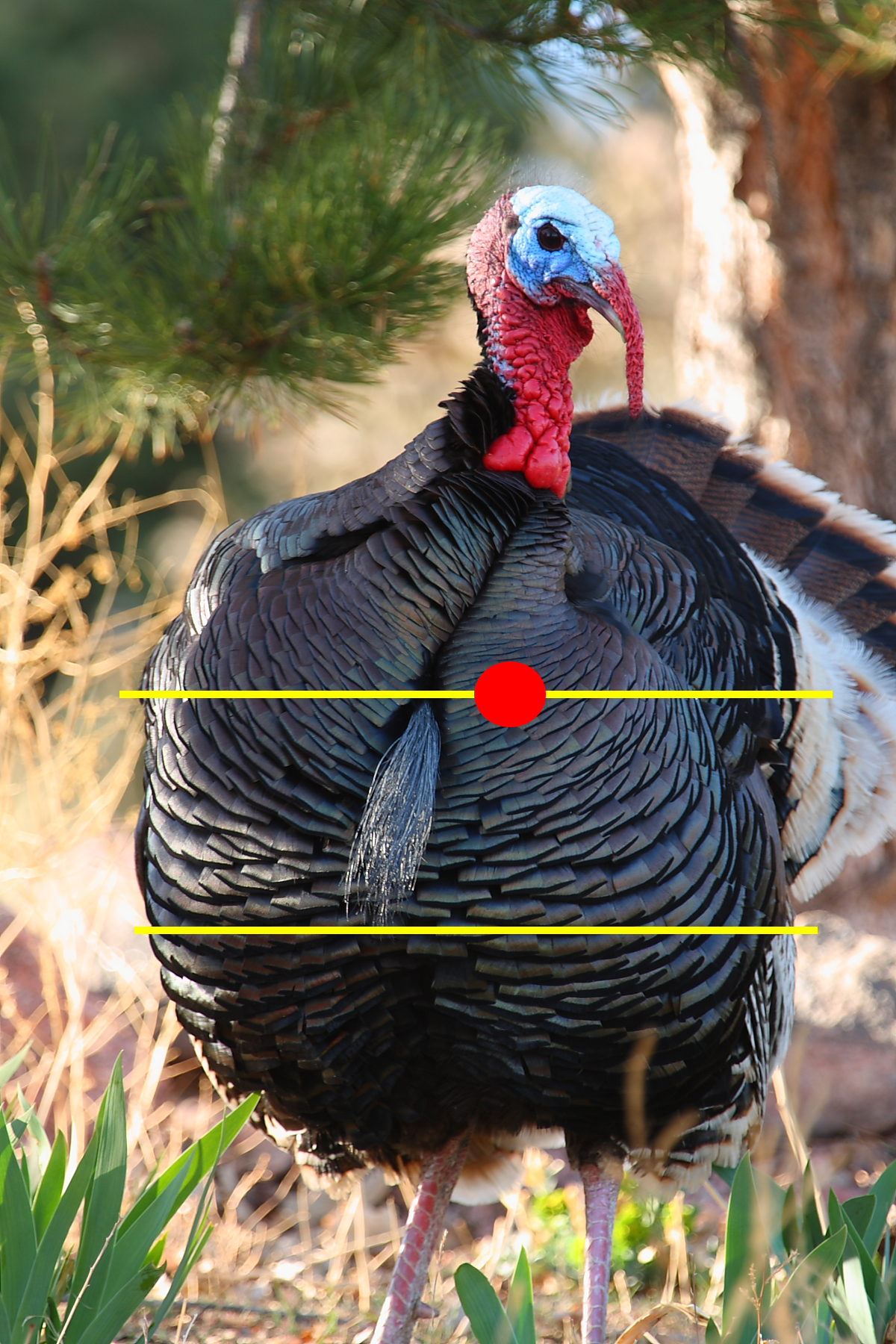 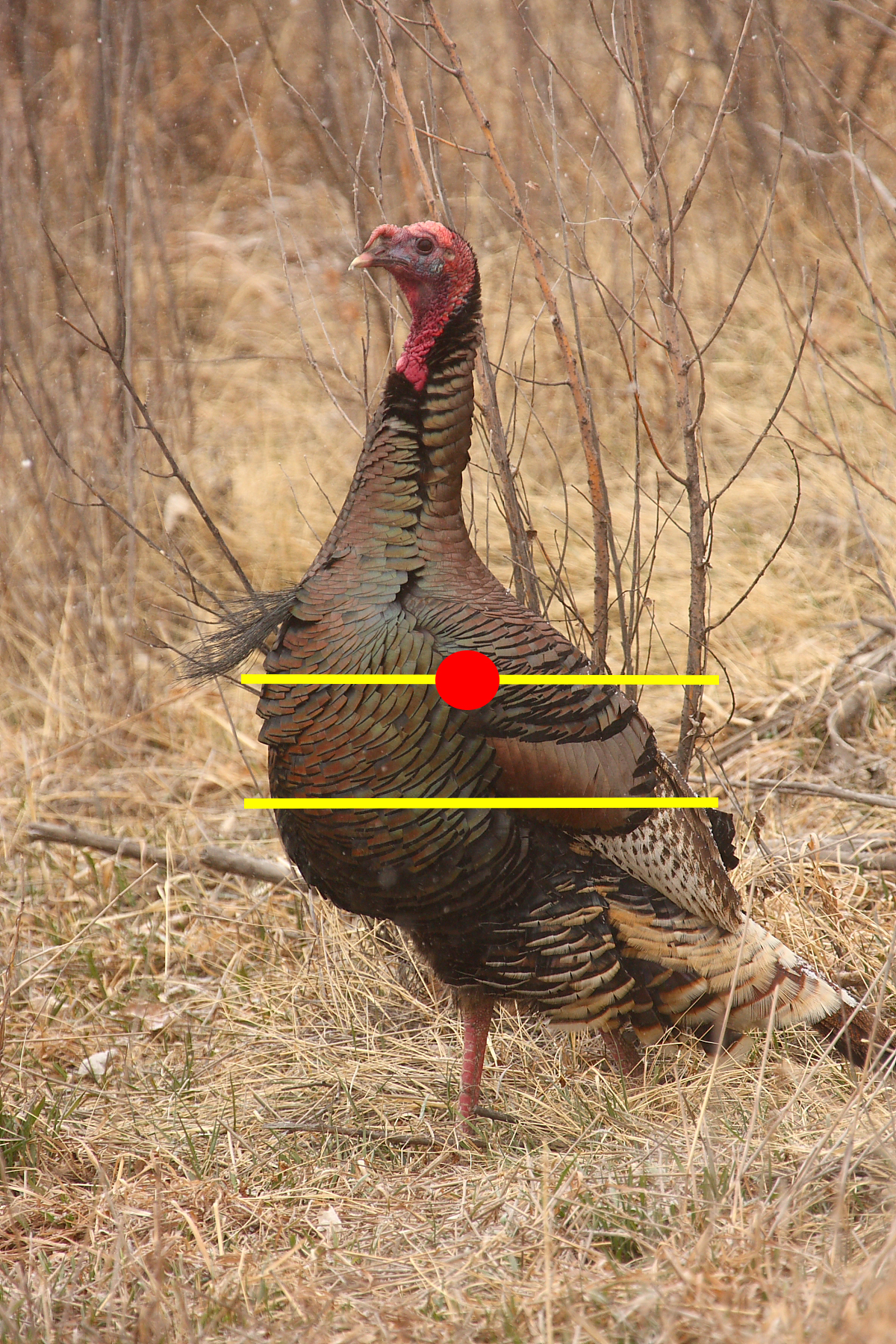 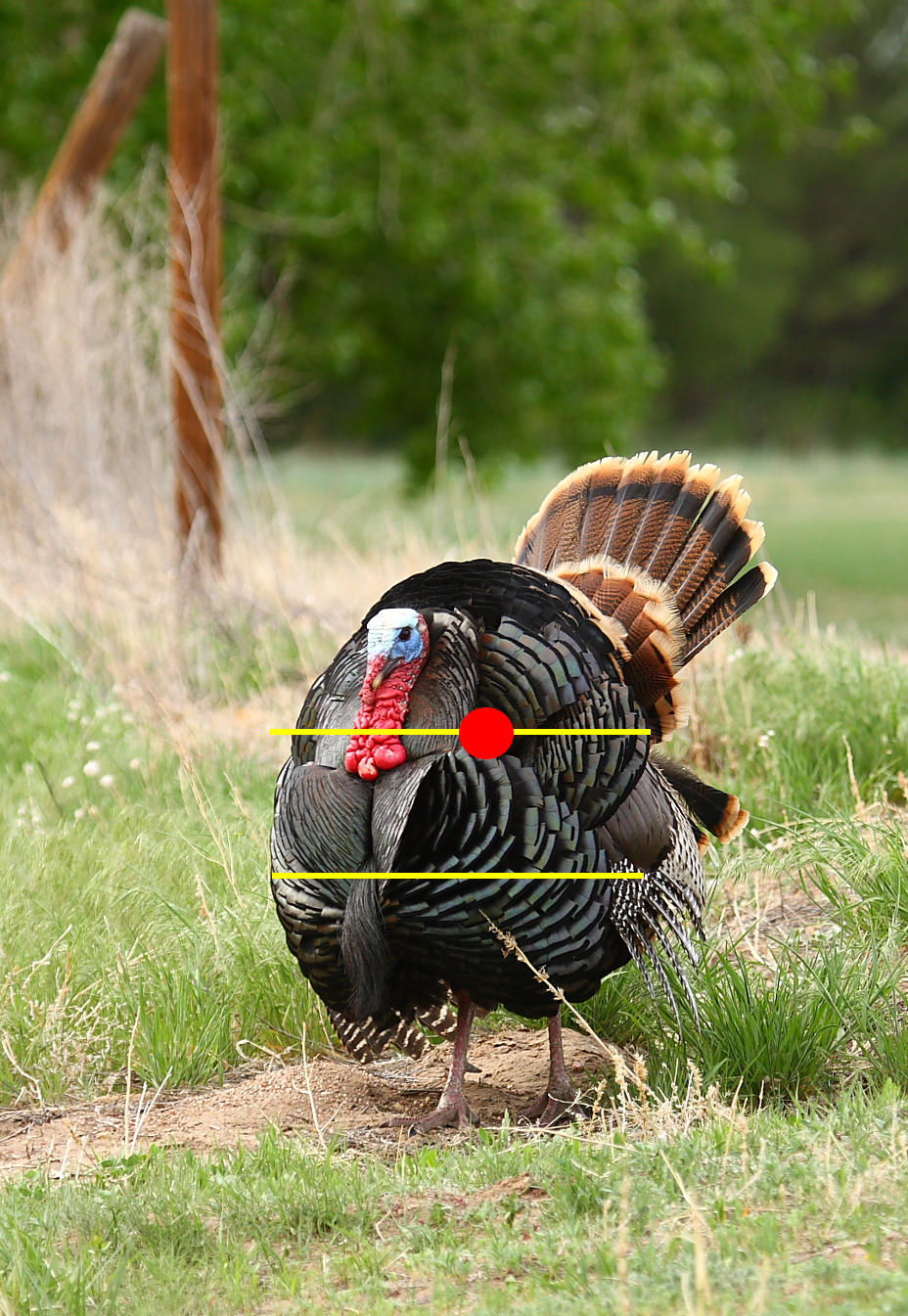 Knowing where to aim at a turkey when shooting a bow can be difficult. Here are some photos that will teach you where to aim, regardless of what shape the bird morphs into.

Now break out the bow and go practice some social distancing out in the turkey woods! 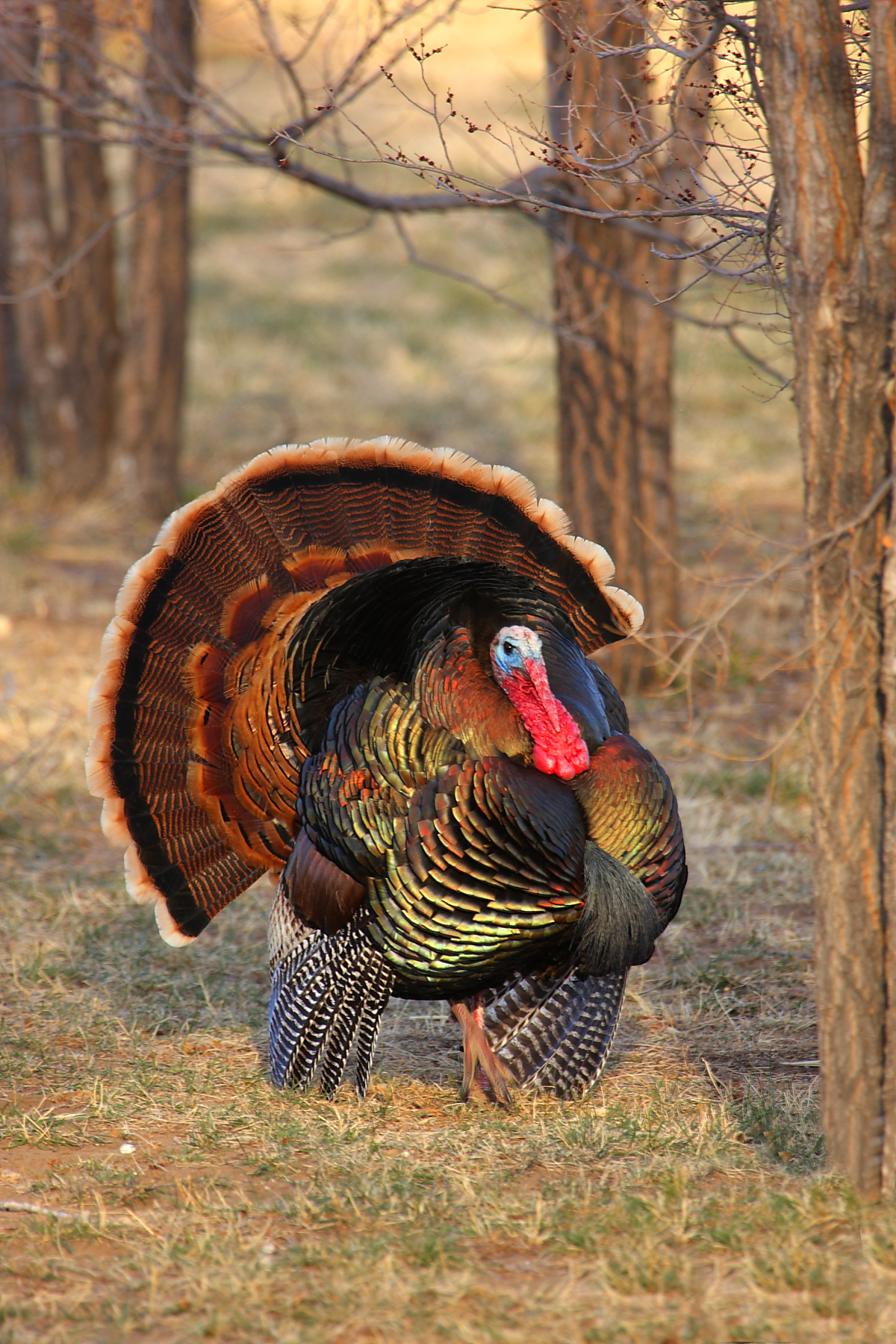 If you are looking for the perfect turkey hunting bow, we have a few suggestions. The Alpha Series bows, which includes the Carbon RX-4 Alpha and the Axius Alpha, with their relatively short axle to axle lengths are ideal for turkey hunting. Most of your hunting will take place from the ground, either sitting on a stool in a ground blind or running and gunning and shooting from the ground, so a shorter bow is easier to shoot when you are close to the ground. Our Blackout color finish is also perfect for staying concealed in dark blinds or for staying hidden behind your bow mounted decoy. These are just a couple of our suggestions, but at the end of the day, any of our bows will get the job done. Just get out there and enjoy chasing turkeys. 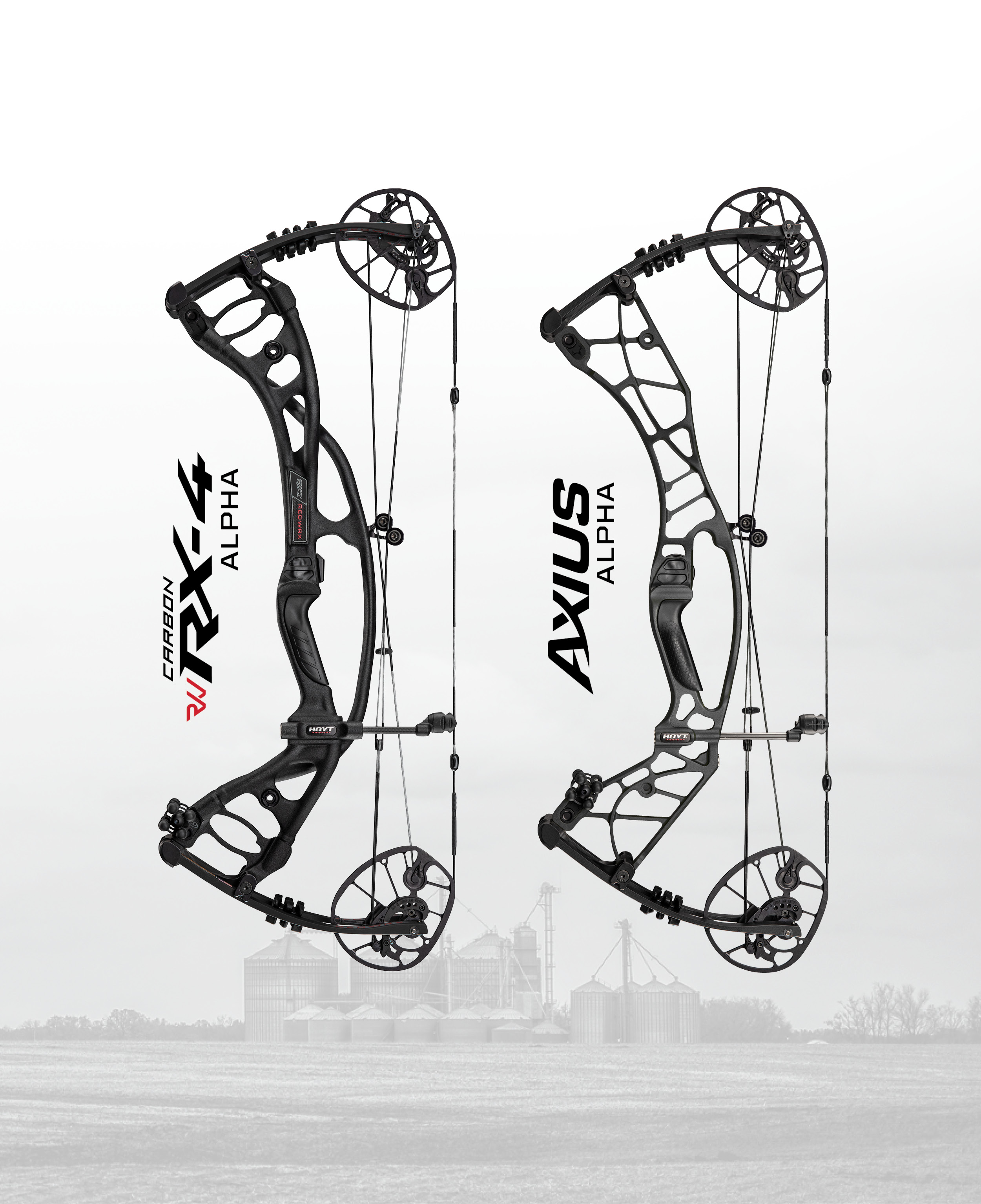