A lightweight treestand or saddle paired with some feathery climbing sticks is the perfect recipe to put you on the path to punched buck tag.

It was hot. Too hot. Mid-day temps climbed into the high 80s and my Oklahoma trail cams showed few day walkers. Plus, the wind was all wrong. To hunt the pair of spots that showed some buck movement, a west wind was needed.

You guessed it. No westerly breezes were forecasted. The wind would be dead south for the entirety of my hunt. So, I went to work.

A study session on onX allowed me to pinpoint a pair of likely bedding areas. It was early October and I knew the bucks would be napping close to their chosen food source. Once bedding areas were located, I strapped a Lone Wolf Alpha Hang On II with a trio of climbing sticks on my pack and headed in at 3 p.m. 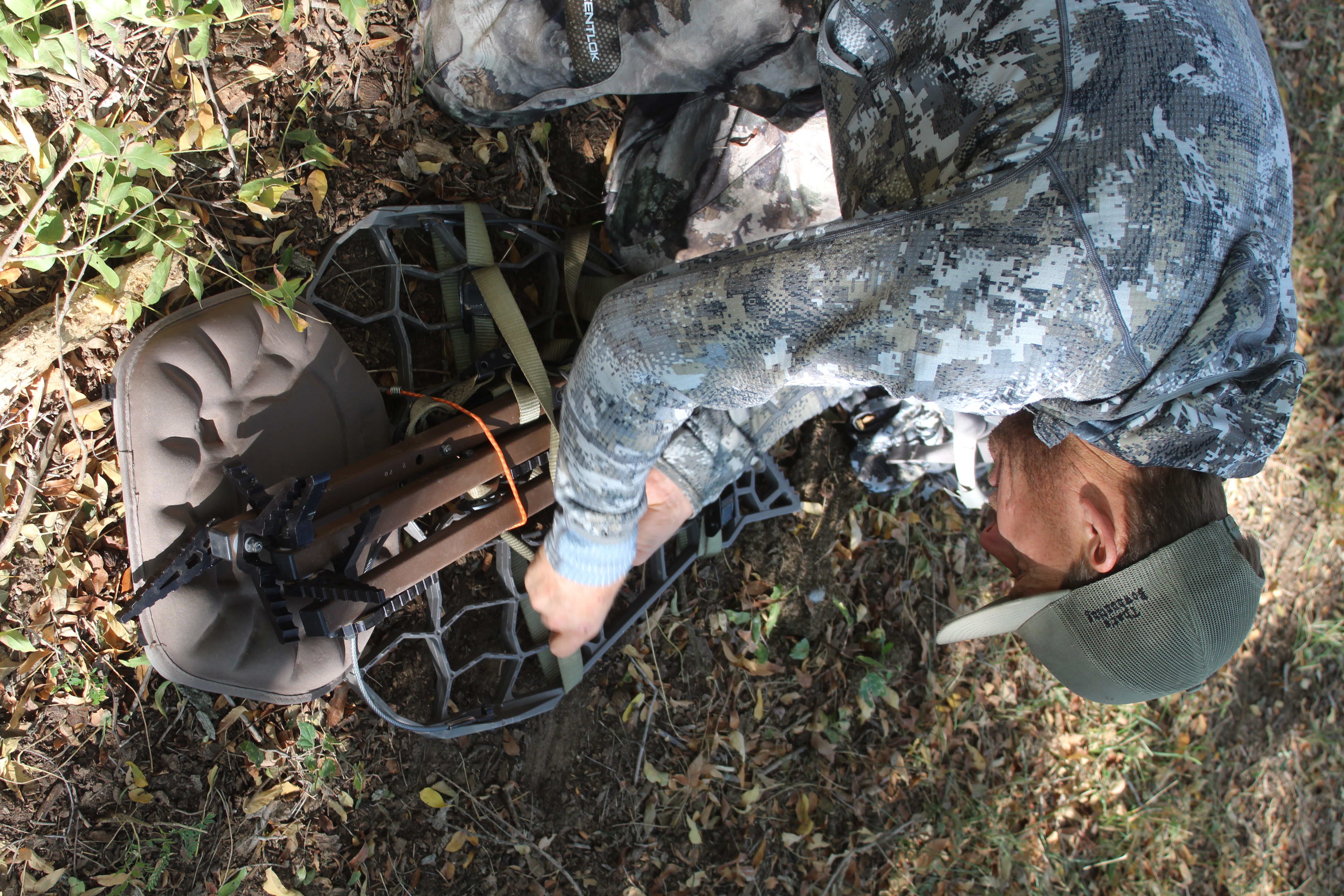 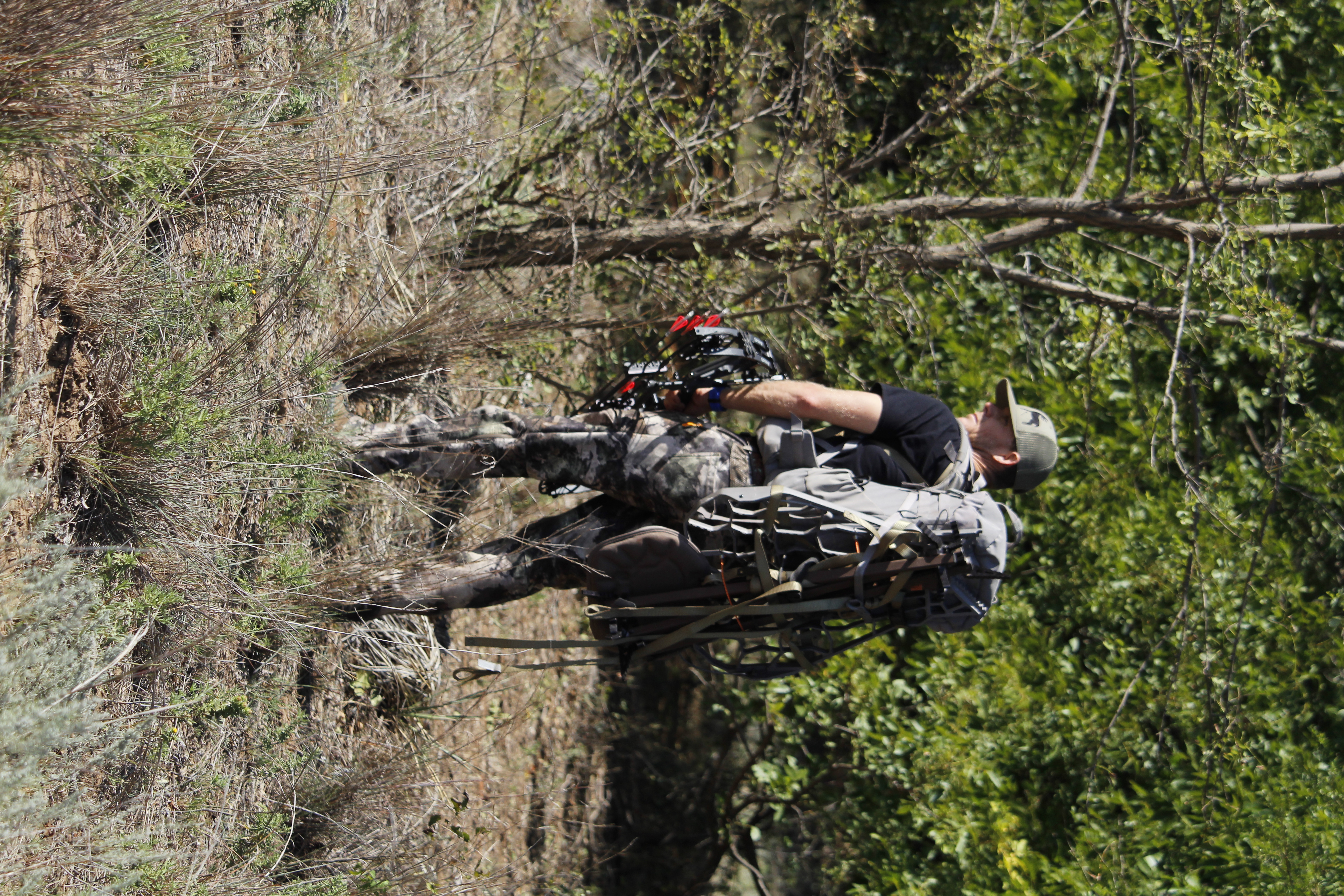 I started snooping hard once I was within 200 yards of the predicted buck bedding areas. A solid trail sliding down a ridge was found, but I wanted to push closer. October is a great time for risky road-trip moves. At 150 yards, I found two trails — one leading from each bedding area. The trail intersection showed lots of tracks, droppings, acorns and other browse. I glanced at my watch — 3:30 p.m. — perfect.

As quietly as possible, I slid up the backside of an oak, trimmed a shooting lane and waited. At 6:05 p.m. a buck coughed. 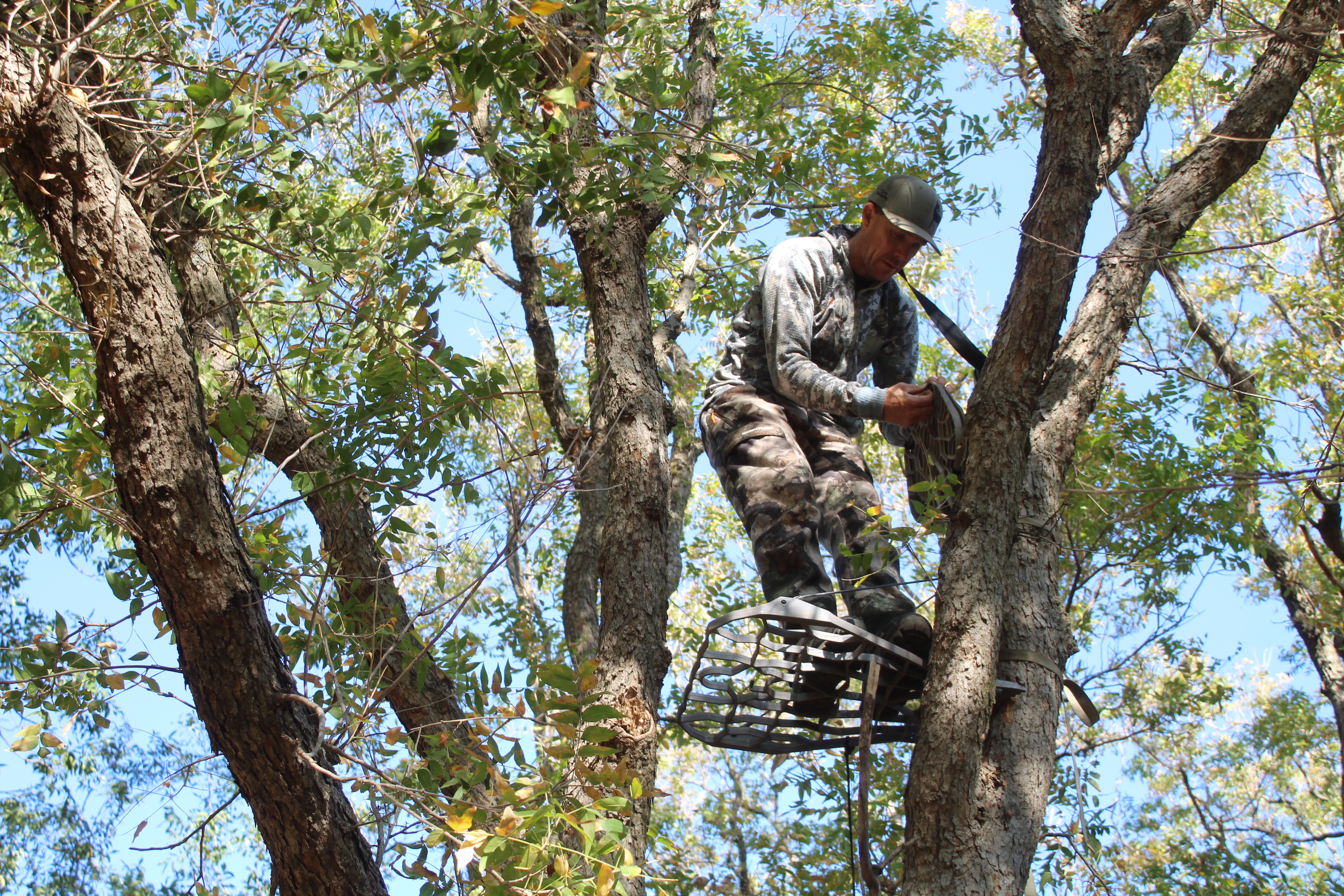 Whether you’re hunting public or private dirt, hang-and-hunts can create incredible bowhunting action. Why? Because it’s a surprise attack. There is no pre-hung stand or camera that has been checked throughout the season. You’re making a move, putting the wind in your favor and going in. There’s nothing like that first sit in a new area, and it’s my opinion, that a first-time-in sit provides the best opportunity for a kill.

Don’t get caught in a slump. If you’re hunting private ground (I was on this hunt) and have stands pre-hung but things aren’t working out, go back to the drawing board. Have a digital map study session and don’t be afraid to try something new.

If you’re on a road-trip hunt like I was, make the most of it. Move to the movement and don’t be afraid of bumping a few deer in the process. Often, it’s those that step outside of established norms that end up punching a tag.

Bucks know how to use the wind in their favor. Straight south winds were the story for this hunt, and those winds had blown for three days prior to my arrival. Bucks leaving bedding areas and staging on the acorn ridge knew how to use that south wind to their advantage. My goal was to get the wind just right for me and make it just wrong for them.

The lone trail that took off from the juncture of the pair of paths bent hard to the southwest. The bend took deer around a clump of brush before straightening out and heading southeast. This meant if Mother Nature added any east kick to the southerly breeze, my efforts would likely be for not.

Did the wind swirl a few times? Yes. Mostly, though, it held true south and when deer slid around the bend in the trail, my scent stream wasn’t detected.

Deer hear really well, but the woods are a noisy place. Of course, uber-calm days aren’t ideal for slipping in close to known bedding and scurrying up a tree, but when a stiff breeze blows, you can get away with more than you think.

The next time you go to the woods, sit for a minute, and listen. Trees will moan, squirrels will rustle in the leaves and hedge apples and acorns will hit the ground. Sticks will pop and other unexplainable noises can be heard. Bedded bucks will be relying on their nose and eyes more than their ears to keep them safe. They hear noises in the woods all the time, and when you saw a branch or even drop a small sapling as I did on this hunt, they don’t tuck tail and run.

Of course, you want to minimize noise as much as possible, but don’t freak out about it. The key is not letting metal hit metal. The sound of clanging aluminum isn’t natural, and deer will likely key on it. Go in early and take your time with the setup process. If you’re in a rush, shortcuts will be taken, and mistakes will be made.

Several seasons back, my good buddy Alex Gyllstrom and I headed into a public-land deer haunt along a South Dakota river bottom. Still green to the hang-and-hunt game, I plopped my butt in the stand seat the second I hit the tree. Alex, who was above me filming, stayed standing. An hour into the hunt I asked him if he was ever going to sit. He looked at me, smiled, and said, “Nope. We are close to bedding and things can happen fast. Plus, with the wind being sort of right, it’s likely you’ll have to make a shot just before the buck’s olfactory system tells him something is wrong. Going from a sitting position to a standing position takes time and creates extra movement.”

He was right. Thirty-minutes later a young buck was on us before I had time to prepare for a shot. Though it wasn’t a buck I planned to take, I still tried to stand and grab my bow. By the time I did and got myself turned, he caught our wind. Stay standing and stay ready.

The small six-pointer slid around the brush and walked right in front of the stand. Behind him was an older seven-point — a great management deer and one that needed to be harvested. The buck stopped and browsed on the small sapling I’d dropped. In the distance, I could see two other bucks meandering along the ridge. I’d slipped into a staging area, and though temps were warm, deer were on their feet.

At a distance of 22 yards, I pulled back my Hoyt Axius Alpha and sent a SEVR-tipped Easton toward him. The buck was quartering away, and my arrow was true — going in behind the ribs and lodging in the offside elbow. Had I played it safe and hunted closer to the food source, I’m confident the bucks would’ve got my wind. If not, it’s likely they wouldn’t have arrived until well after legal shooting light. Regardless of the time of year, there comes a point when you need to make something happen. Go hang and hunt! 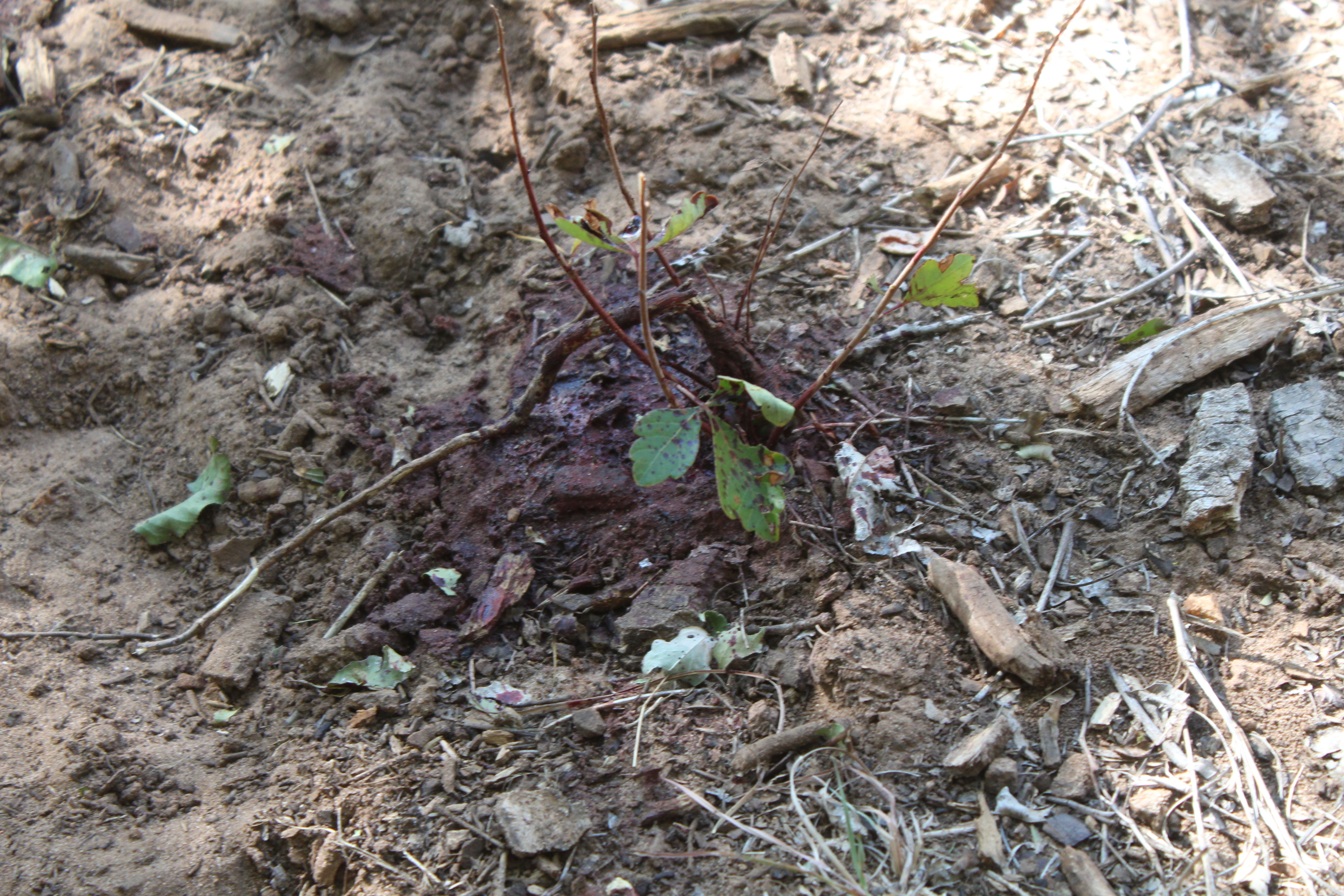 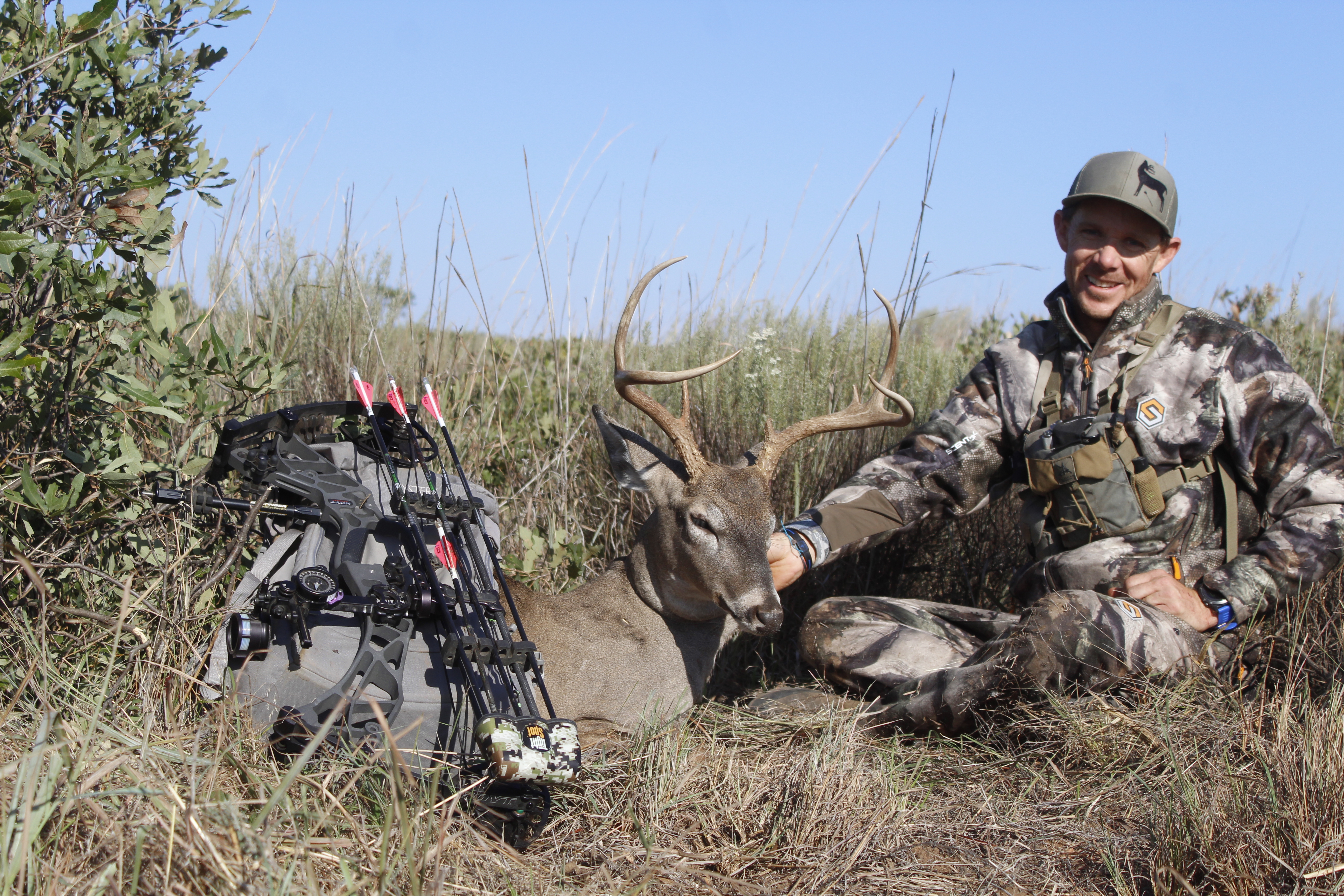