Don’t be scared of hunting whitetails on public dirt. Heed the to-come tips and experience a season of pure whitetail joy.

It happens, and it sucks. I lost mine a couple years back. I’d just gotten to the point where the food plots were holding deer and things were coming together. I had some good bucks — one in particular I wanted to send an Easton through — then I lost it. Someone with more green in their wallet finagled their way in, and just like that, I was back to bowhunting open-to-anyone dirt.

If the above has happened to you or you’ve decided to jump headfirst into the public-land whitetail ocean, read on. State wildlife agencies across the country are doing a fantastic job at adding more huntable land. Walk-In Only and other state leases seem to be popping up all over. This is great news. Not only does it give you multiple options to help solve the “where to go” puzzle, but it also means you can also get away from the masses.

Public-land whitetail hunting with archery tackle is extremely enjoyable, and I’ve hunted locales that have been just as good or better than private property. The key is doing your mapping homework, and for me, that means using a digital mapping app like onX in conjunction with your smartphone’s satellite map. I use onX to find huntable dirt, and then scout that dirt with my Maps App on my iPhone. I like the clarity of this app over onX and can change the terrain from 3D to 2D. 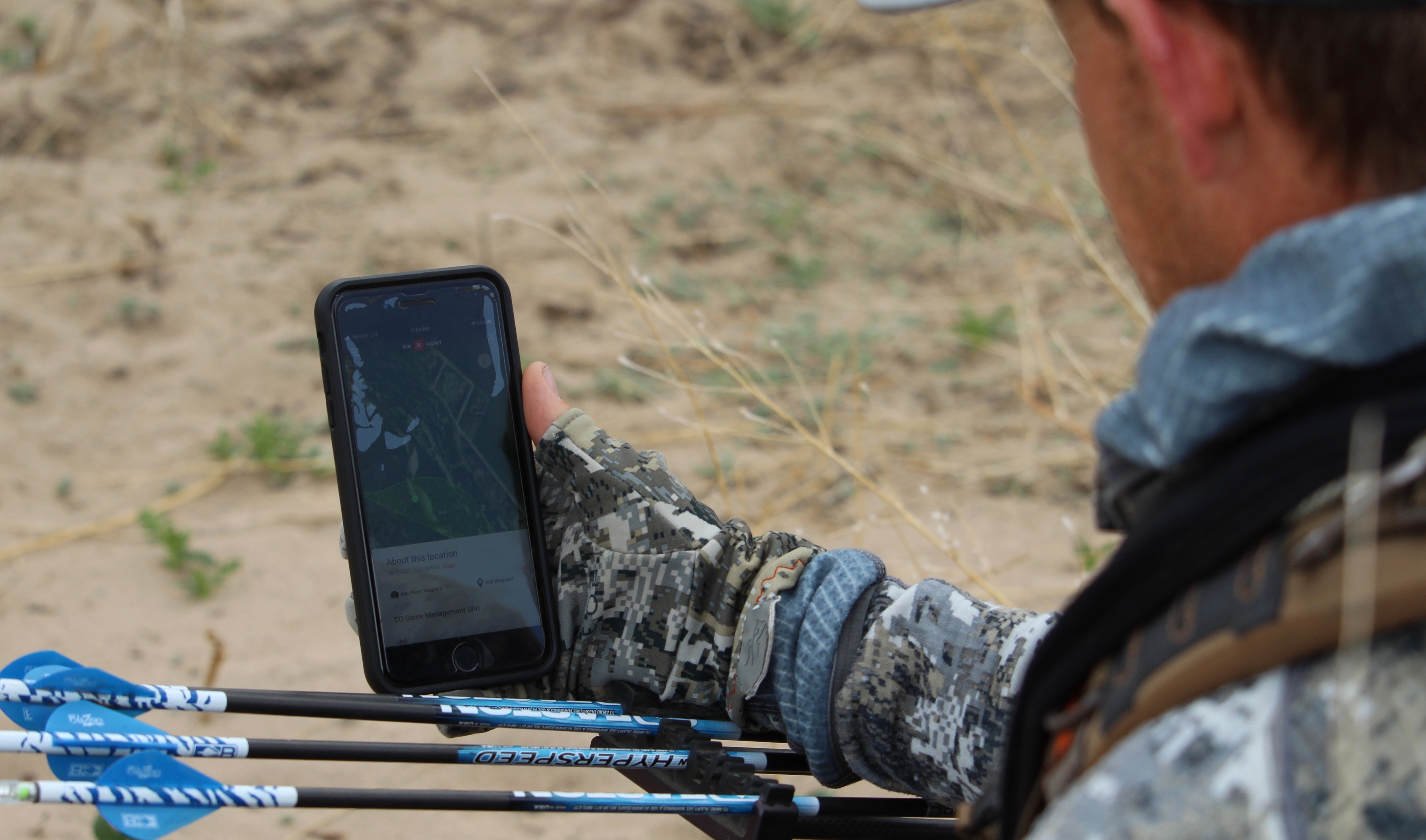 Don’t overlook smaller parcels. Most bowhunters do — thinking they are too small — and that means many of these lesser tracts get very little traffic. If a spot, regardless of size, looks like it would hold deer and would be good to hunt, drop a pin and check it out upon your arrival. 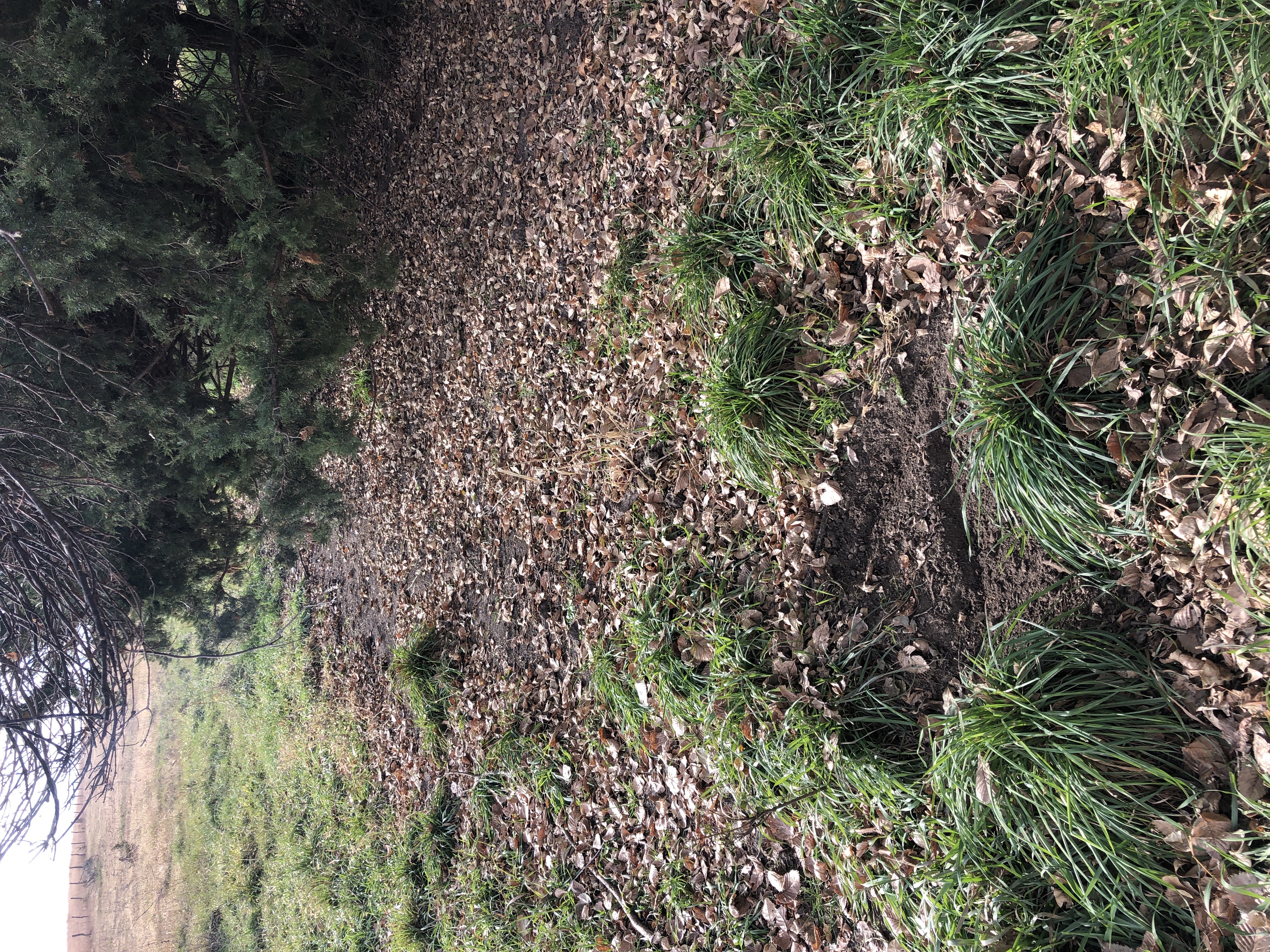 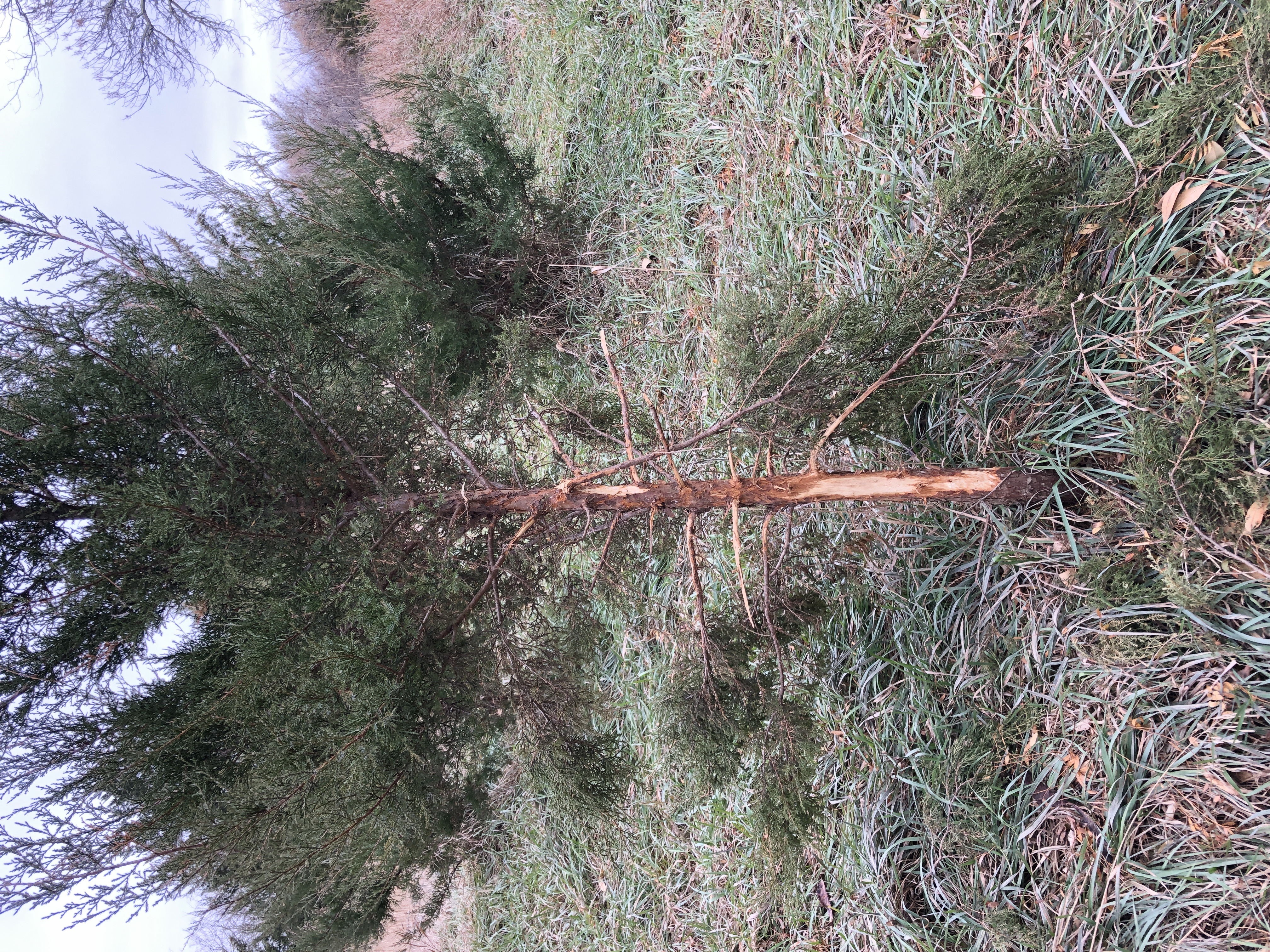 When it comes to hunting bigger properties, look for areas that others won’t want to wander. Look for access that requires multiple creek crossings or some serious uphill vert or steep downhill treks. Most public-land bowhunters hunt the fringe. They will post up near food or a no-brainer spot that is close to the parking area that looks too good to be true. Guess what? Those spots are too good to be true. They get hammered. Push past the fringe. Locate likely bedding areas in thick cover and mark those locations. Often, I find the exact tree I want to situate a stand while e-scouting an area. 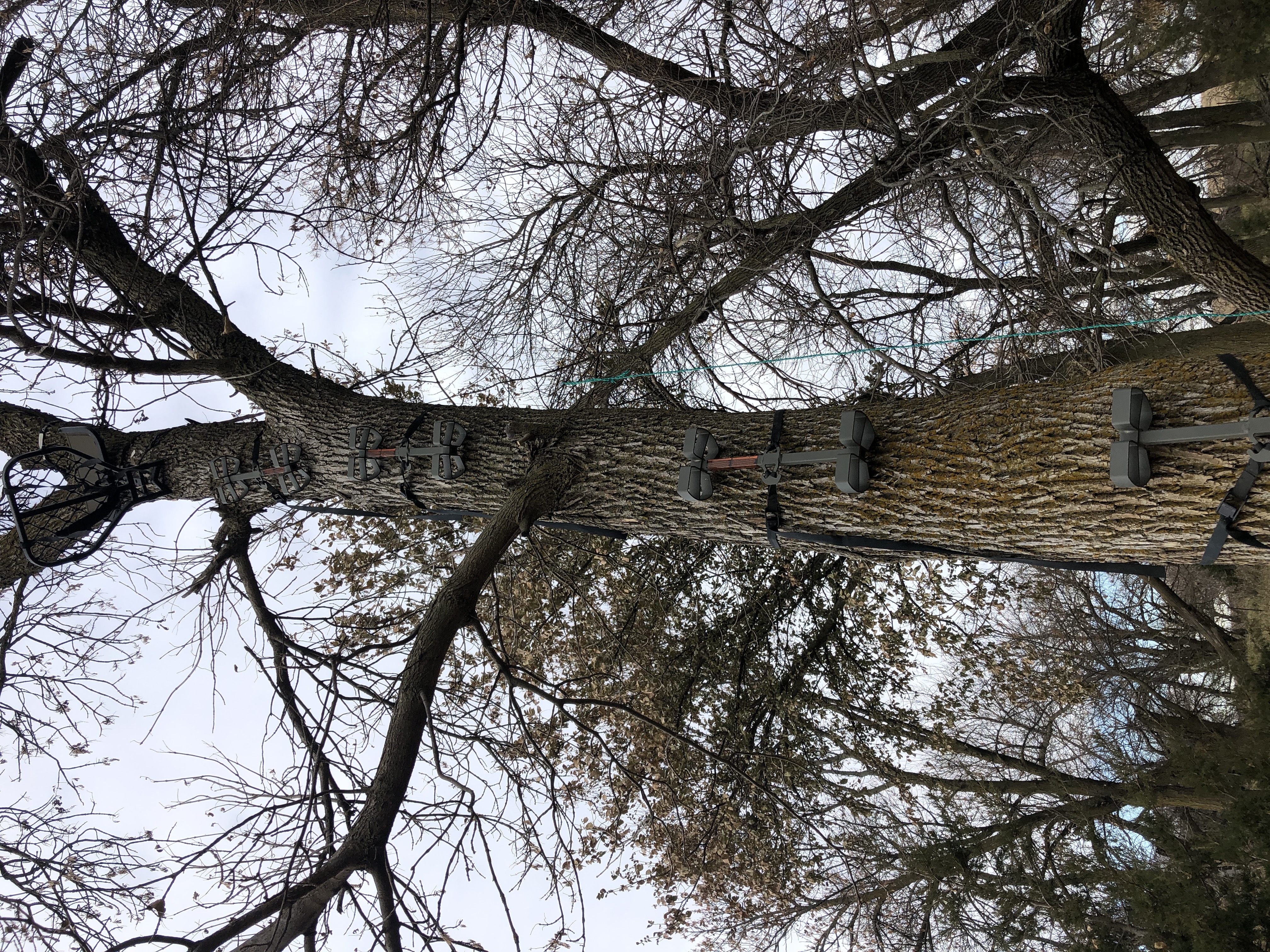 Run-and-gun public-land bowhunting requires some necessary gear. You don’t want to be hauling heavy ladder stands and sizeable lock-on sets around the woods. Go light and stealthy. I really like Lone Wolf’s Assault II. The stand is comfortable, adjustable and I’ve yet to find a tree I couldn’t weasel it into. Pair this stand with Lone Wolf’s Climbing Sticks and you have a lightweight system you can depend on. I’ve also had good success with Millennium’s M7 MicroLite as well as a no-longer-in-production Ameristep model. Go light, and pick a stand that was built around weight saving, adjustability and functionality over comfort. 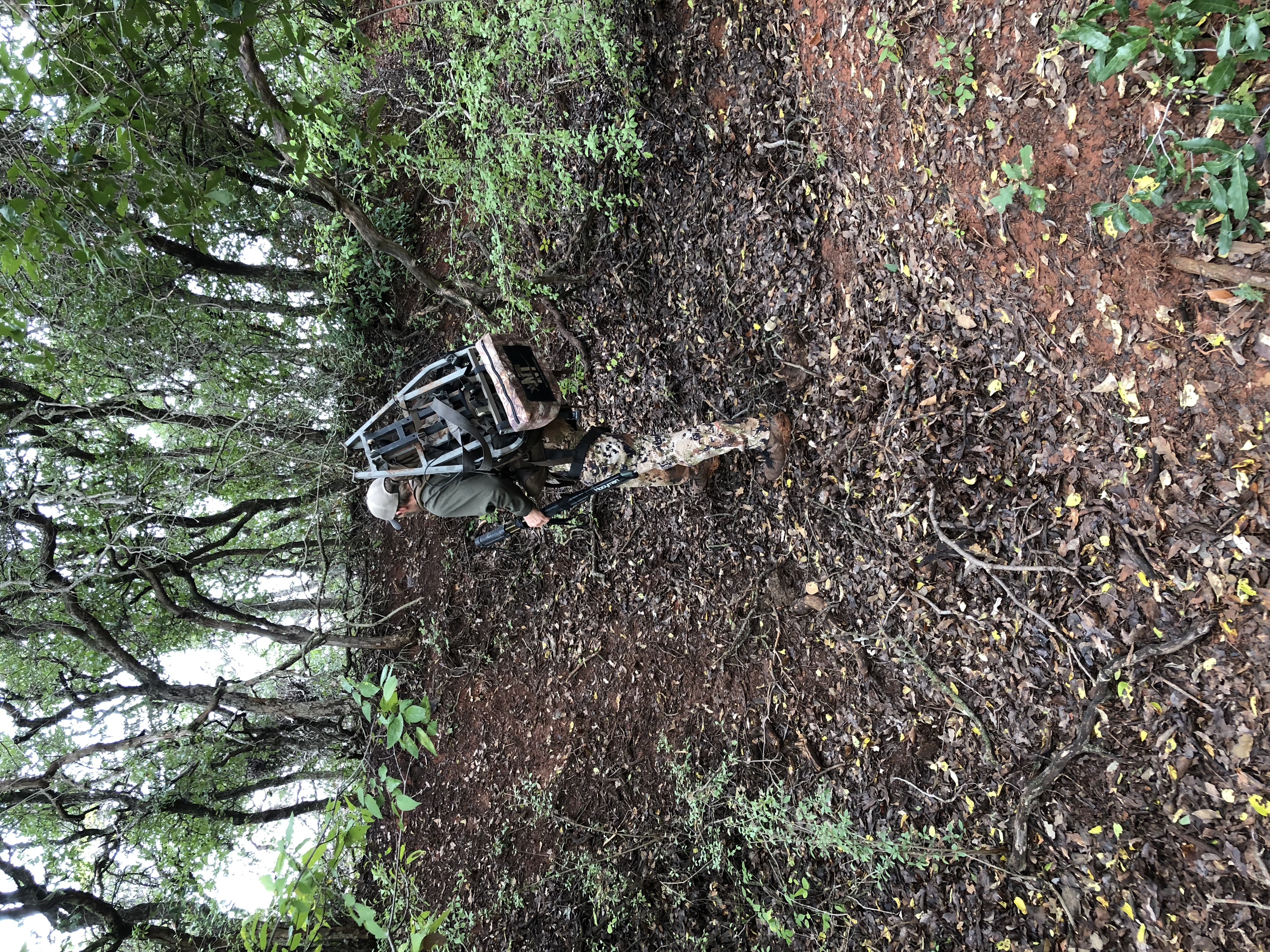 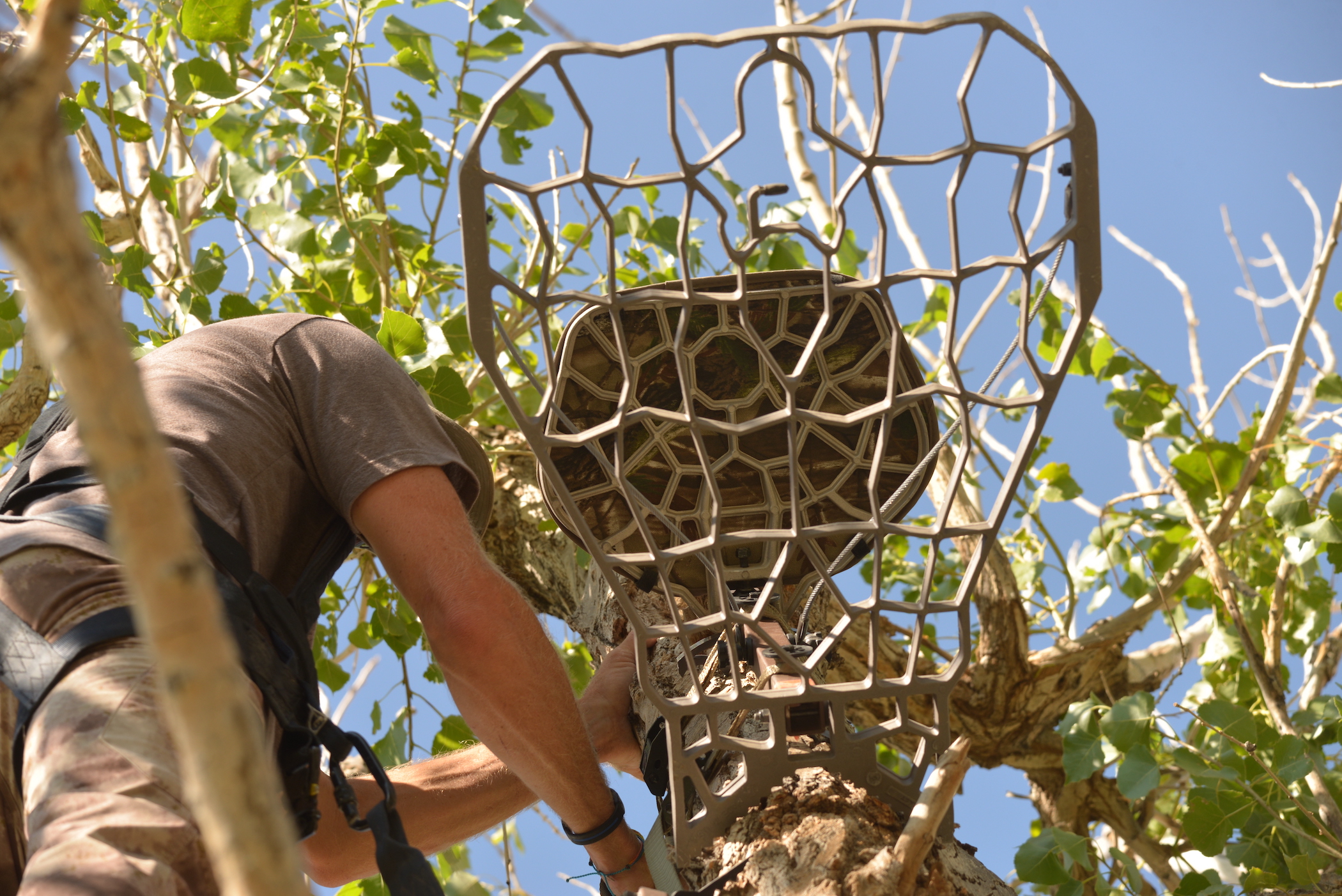 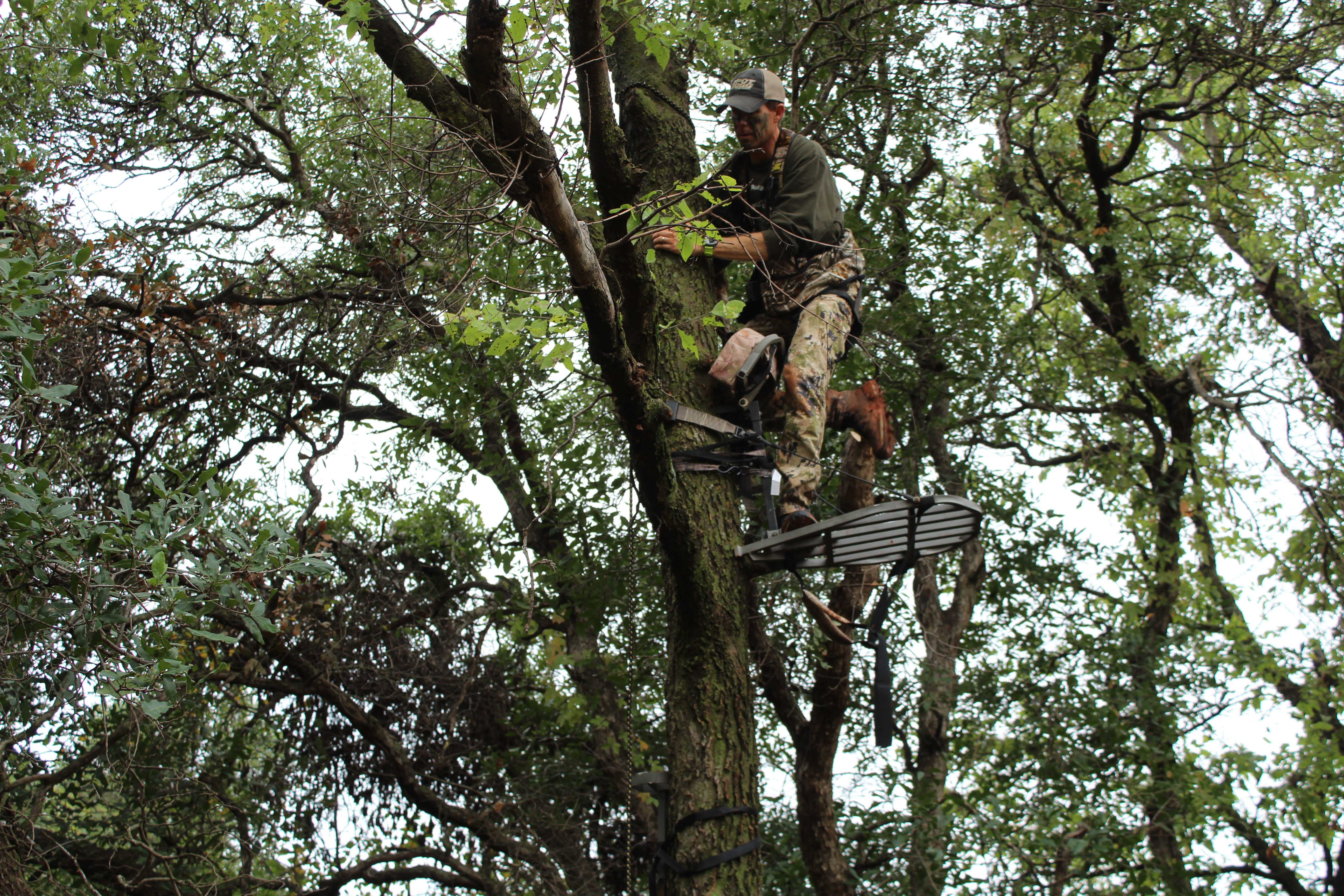 Of course, tree saddles are another way to go and are growing in popularity. I’ve used Tethrd’s Phantom Saddle, and while it works and is very, very effective, I just prefer a regular lock-on.

Tape all metal contact points on your stand and sticks with gorilla tape and develop a system for attaching the stand and sticks to your back. Do this multiple times before your trip. I put all of my gear in my pack and then attach the stand and sticks. Then, I empty everything out and repeat the process. The successful public-land whitetail hunter has an organized pack system. Every pocket has a purpose as does every strap on the pack’s outside. 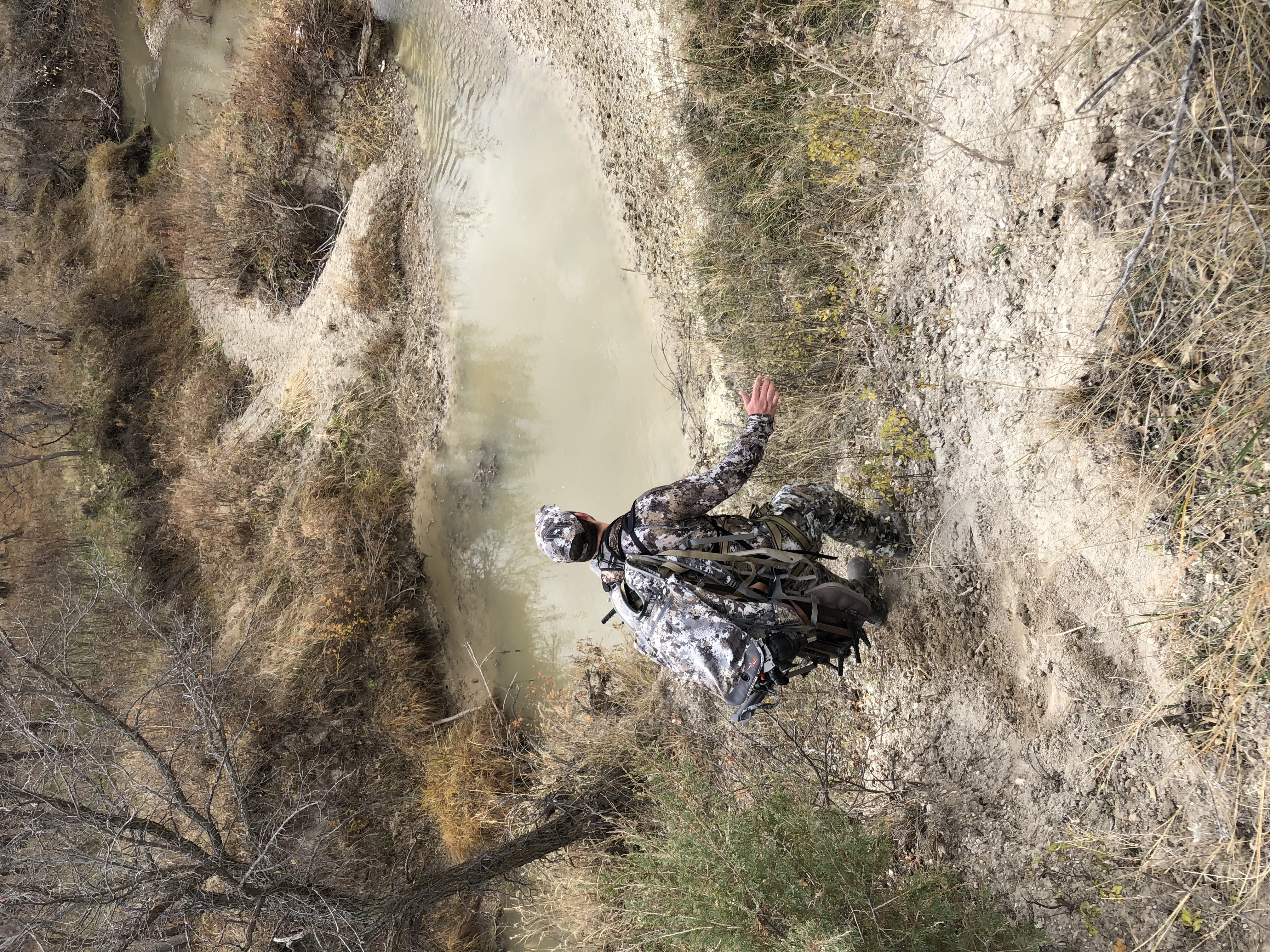 I also recommend a bow with axle-to-axle dimensions that aren’t too long. Why? It seems most every tree I find myself in is crooked and cramped. I’m not going to lie, though. I’ve never been in a tree where a 34- or 35-inch axle-to-axle rig couldn’t be used. It just takes some maneuvering and bows of this size take up a lot of in-the-tree space. Hoyt’s new Carbon RX-4 Alpha and Axius Alpha bows measure 29 ½-inchs between the axles and promise incredible in-the-tree maneuverability. 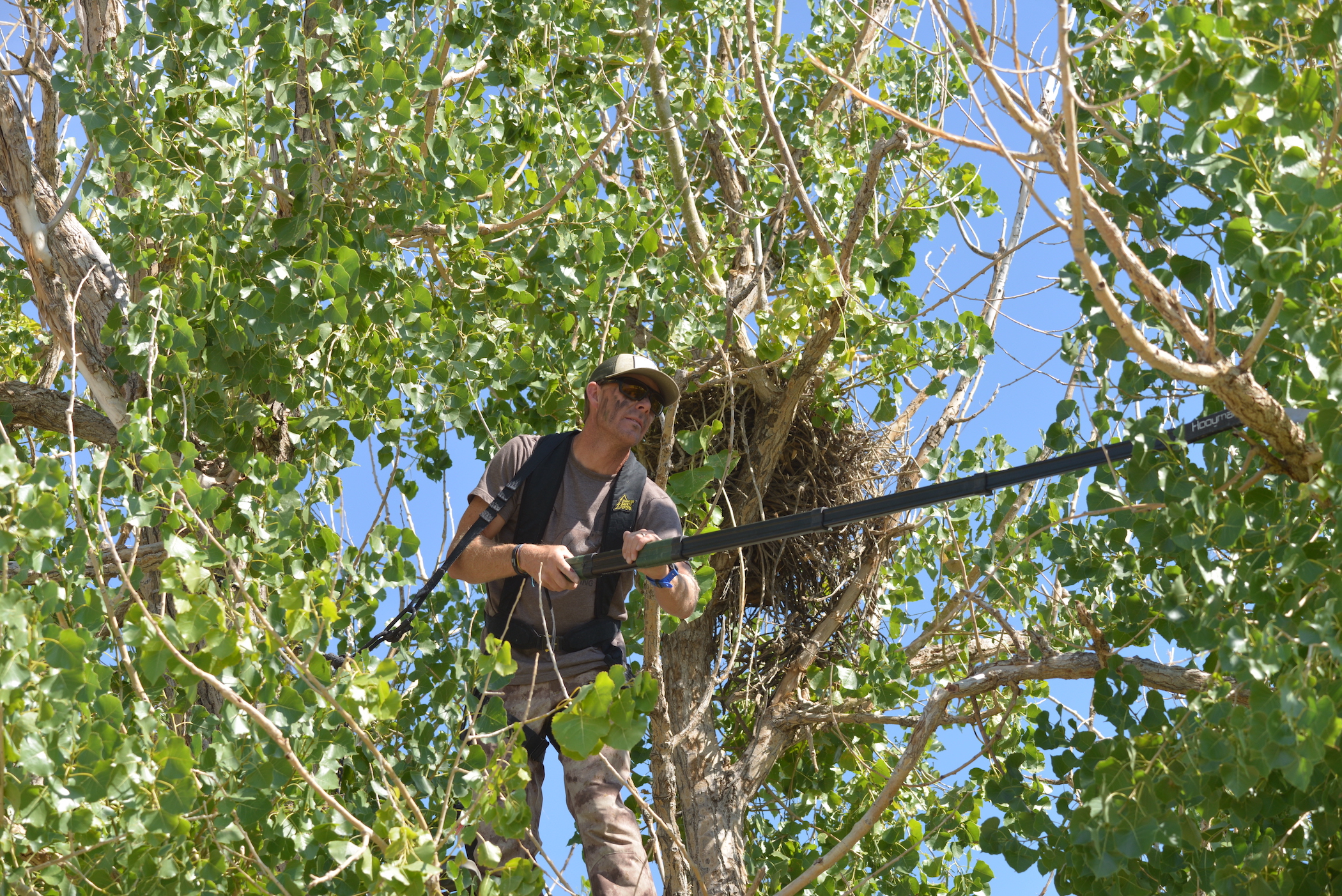 Out With The Old Mentality

You’re not hunting bucks you have history with. These bucks don’t have names. You can’t wait until next year to kill them, and you can’t pause for the perfect front to arrive. You’re hunting public land. You hunt when you can — mid-week seems to be best — and you push in deep. Blow right past perimeter sign. I don’t even stop at the first rubs and scrapes I see. Most of them, if you’re in a good area that holds deer, will be visible after a 200-yard walk from the parking lot. Much of this sign is made at night, even during the rut. Push past the perimeter sign and press in close where you believe bucks will be bedding. Don’t fret if you bump a deer or five. It happens.  Again, you’re not hunting an area you know like the back of your hand and you’re not playing it super safe. You’re going into an area where deer will be on their feet during daylight.

Move to the movement. If there’s one tip I can give the public-land whitetail hunter it’s this one. If you’ve pushed in deep and are seeing deer, but notice they are using a river crossing 60 yards from your tree, move your stand. Don’t wait for those deer to come to you. Don’t plan on calling them to you. I don’t like calling much on public land. Don’t plan on making the move after a couple of days. Do it right away. If you don’t, you run the risk of another willing-to-wander hunter moving in and killing a deer that was meant for you.

Adjust your goals accordingly. If you’re dead set on plucking a 160-inch buck from public land, by all means, get after it. They are out there. However, I strongly suggest you shoot the first good buck that will make you happy. There’s something magical about walking up on a white-tailed deer — any white-tailed deer — that has been harvested on public ground.

Remember, unless you’ve made a few scouting trips and set a few cameras, you won’t know what size of deer you may encounter, and honestly, that’s part of the appeal. You’re just going hunting. It’s simple, joyful and beautiful. Enjoy the journey and get after it. 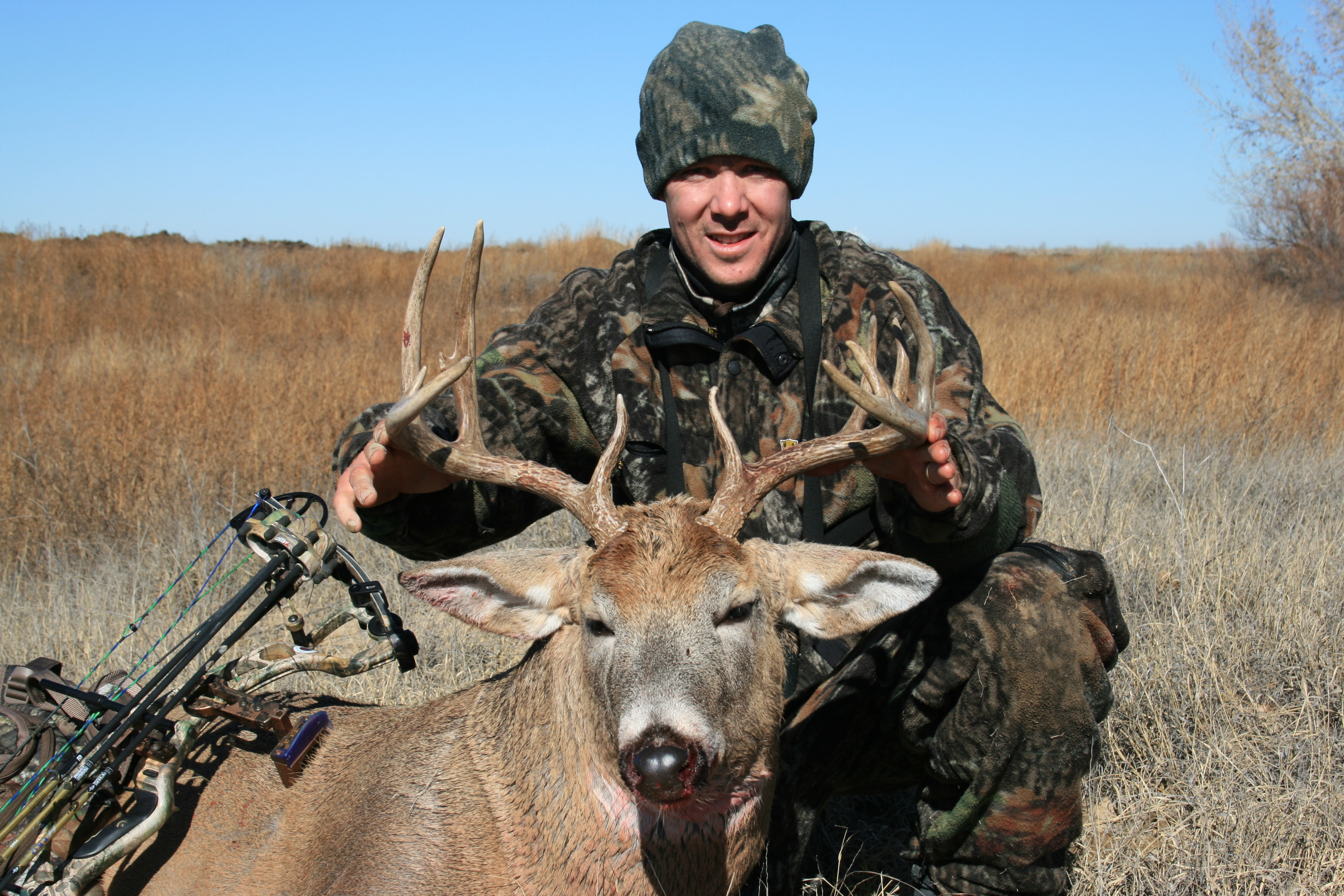