When I started bowhunting mule deer nearly 30 years ago, I realized early on that there were two primary seasons, early and late.  I also learned that late season meant that you hunt the does to find the bucks as most of the late seasons I hunted in New Mexico and Arizona in late December into January ran somewhat concurrent with the tail end of the Mule Deer rut.  The majority of my bowhunts however have always been focused on the early season.  Beginning in mid-August and running through the end of September.  There’s nowhere I’d rather be than enjoying the cool nights and warm days in the Rocky Mountains in pursuit of mule deer.  It didn’t take but one season for me to realize that at the end of summer there are only a couple of things on a wary mule deer buck’s mind and those are staying alive and FOOD!   Find the feed, find the bucks, it’s really that simple.  The following is what I have learned over the past 26 years of bowhunting mule deer that may help lessen the curve for those headed out west in hopes of punching a tag on a big velvet muley this season.

If you’re after high country mule deer in the Centennial state, then early is the name of the game. 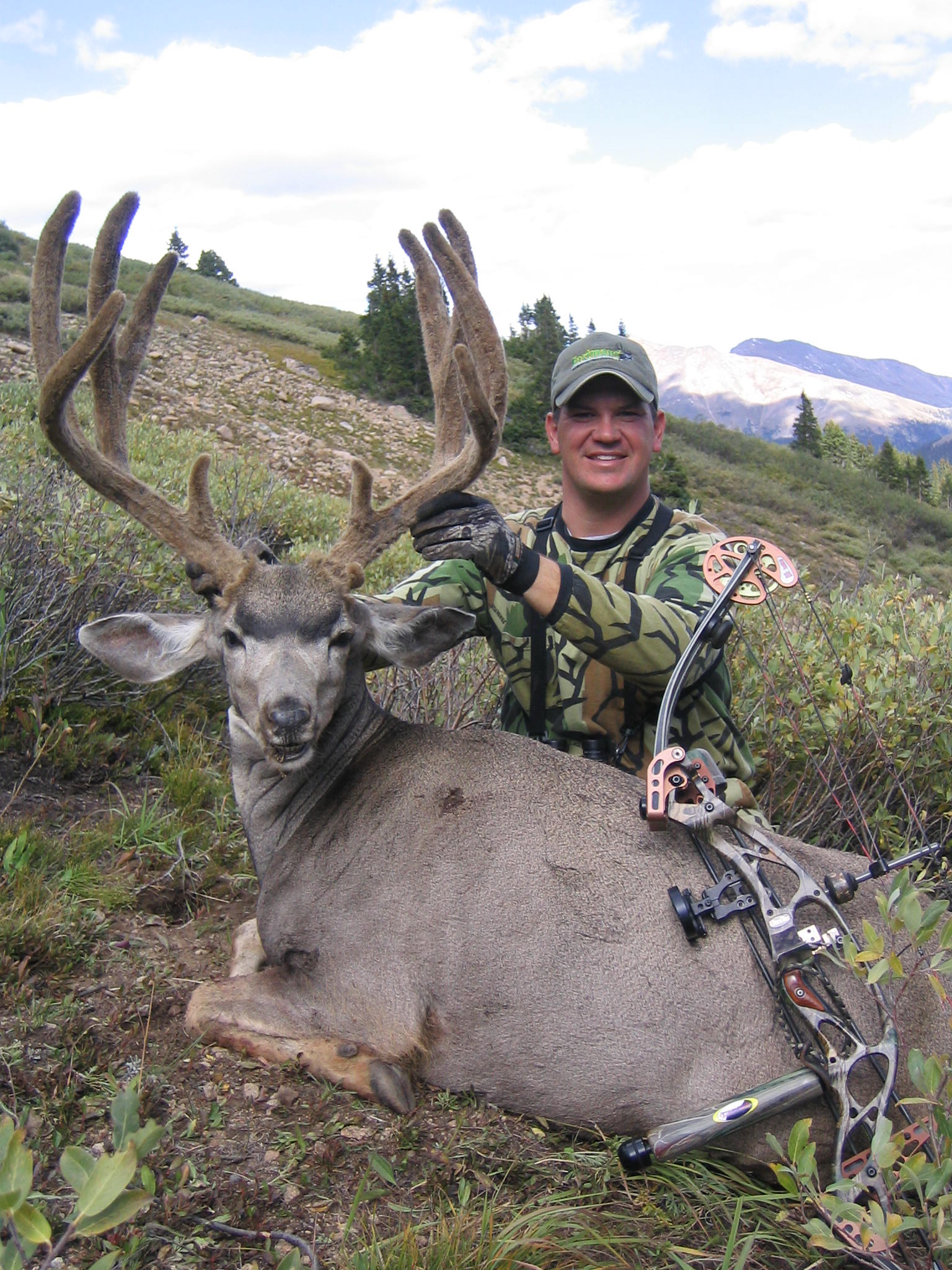 The author arrowed this big Colorado bruiser at 2:00 PM after glassing him up as he changed bed locations in the dense Willow thicket in the high alpine.

Big mule deer bucks that spend their summers in the high alpine do so for several reasons which include seclusion, less bugs and biting flies and the abundance of protein rich foods.  In the Alpine you will find vast seas of various Willow species.  Willows offer an abundance of protein and rich nutrients the bucks need to put on fat and help grow stout heavy antlers for the upcoming breeding season and harsh winter conditions.  Though Willows vary in size, the taller thicker areas provide ample shade for most of the hot, long summer days.  But it is the shorter younger Willows that offer the best feed.  When you glass bucks up in the big patches of Willow, you’ll often see them get up out of thick huge patches that are well above their heads and wonder out into much lower growth, about chest high. 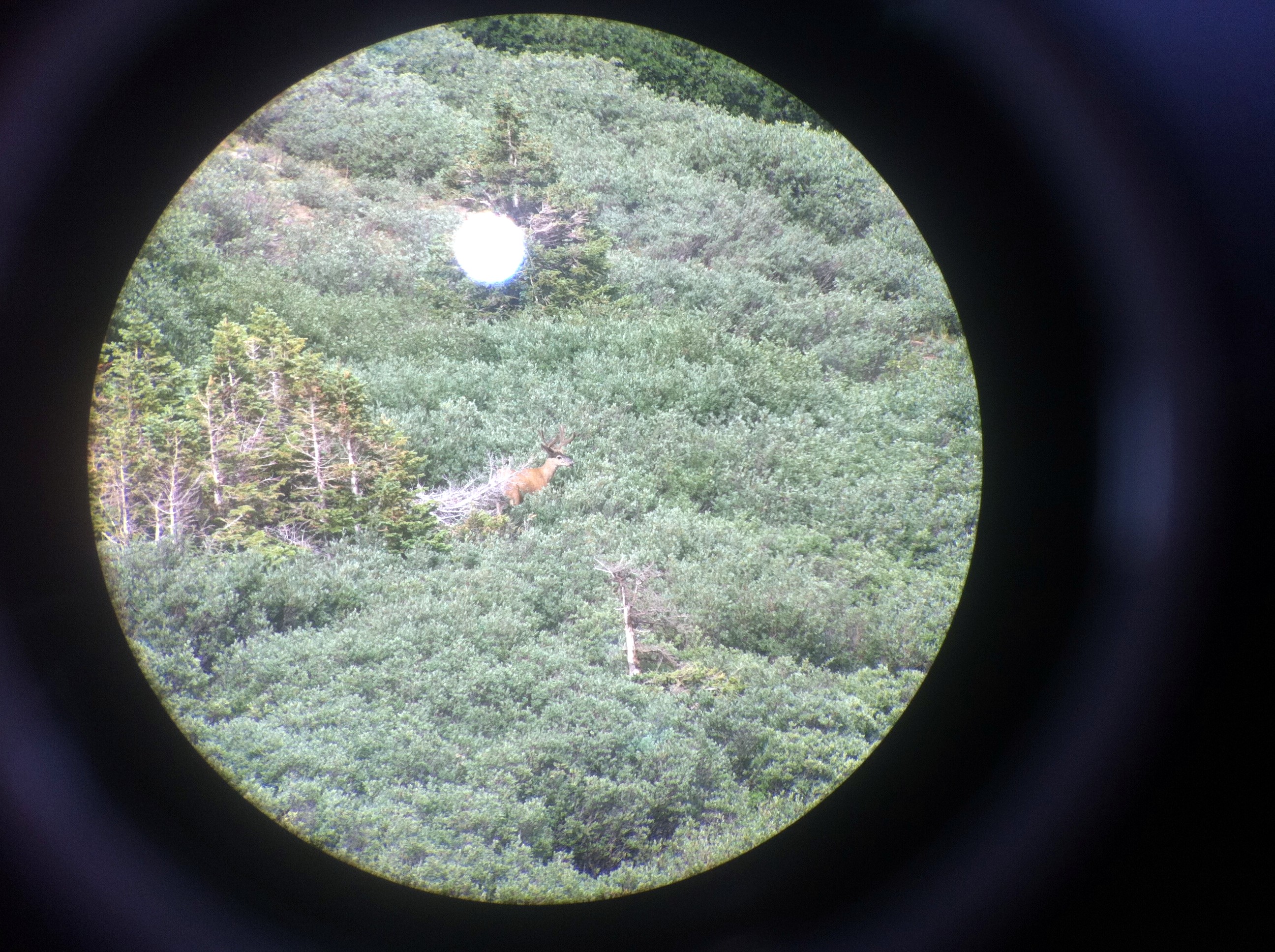 A nice mule deer buck feeds in the chest high willows in the Colorado high country.  The buck was bedded in the willows in the upper left corner of the pic.

This offers ample food that the deer do not have to put much effort into eating.  They may periodically get up throughout the day to feed and since they are ungulates, they chew their cud and feed about ever six hours.  Throughout the day bucks will change locations to maintain beds in the shade.  Their big red coats are easy to pickup in your spotting scope and binos.  When I bowhunt high alpine bucks in Colorado I try to locate patches of willow along a spring or small creek. The water is key for the deer to drink however it also provides thick, dense, mature willows that will in turn provide all-day cover for the deer.  Find a spot like that with younger willow around the fringes and there’s a good chance you’ll find bucks.  Plan your hunt early, within the first two weeks of the season.  In my experience after the second week of season the risk of early snow greatens and the lower temps can get the willow leaves turning red and yellow fast as they begin to die and when that happens it is no longer a viable food source forcing the deer to  drop lower on the mountain to find a different feed and once they move into the timber they become more difficult to find as the food is sparse and not as concentrated in the dense forest.

Utah has been a long-time favorite destination for bowhunters looking for outsized mule deer.  I fell in love with bowhunting mule deer in the Beehive State about 10 years ago.  I found the steep, open slopes of the Utah mountains made for challenging but super rewarding bowhunting opportunity.  The mountain peaks that I hunt in Utah are several thousand feet lower in altitude than the mountain peaks I hunt in Colorado and because of that the habitat and food sources are different, and thus my hunting style varies.  Utah is dry, steep and crunchy and the winds are fickle.   I have found that ambush style hunting in the Utah mountains works much better for me on average than does the spot and stalk style of hunting that I am accustomed to in Colorado.  I found Antelope Bitterbrush or what the old timer’s call “Buck Brush” is very plentiful in the Utah mountains and even at the higher elevations.  Bitter Brush (Purshia tridentate) grows between 2,300 to 11,00 feet above sea level making it an abundant, nutritious shrub that deer adore throughout the west. 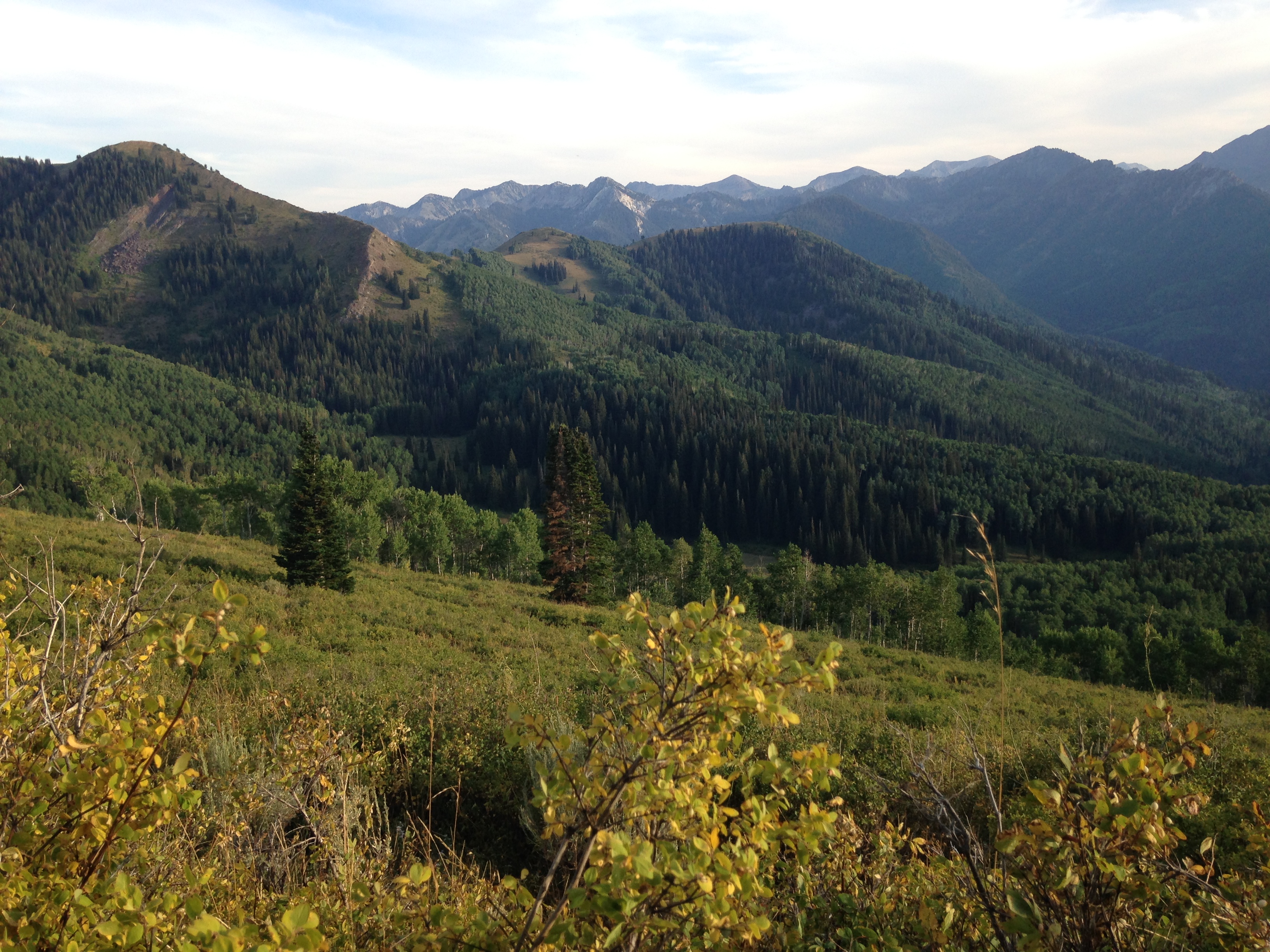 A typical high Utah canyon dotted with succulent Antelope Bitterbrush and a plethora of broad-leafed plants, a mule deer smorgasbord!

Some of the biggest concentrations of Bitterbrush I’ve found in the north-central Utah mountains have always played host to hoards of mule deer bucks in the early August archery season.  Bitterbrush is a hearty shrub with leaves that last well into the fall.   Besides Bitterbrush, other foods that mule deer will concentrate on in the late summer months are a combination of grasses and forbs include dandelion, mountain bluebell, sawtooth butterweed, kochia, tailcup lupine, clover and many other types of broad-leafed vegetation.

I have ambushed good bucks many times in Utah by getting up hours before daylight, hiking in and setting up in known favorite patches of Bitterbrush. 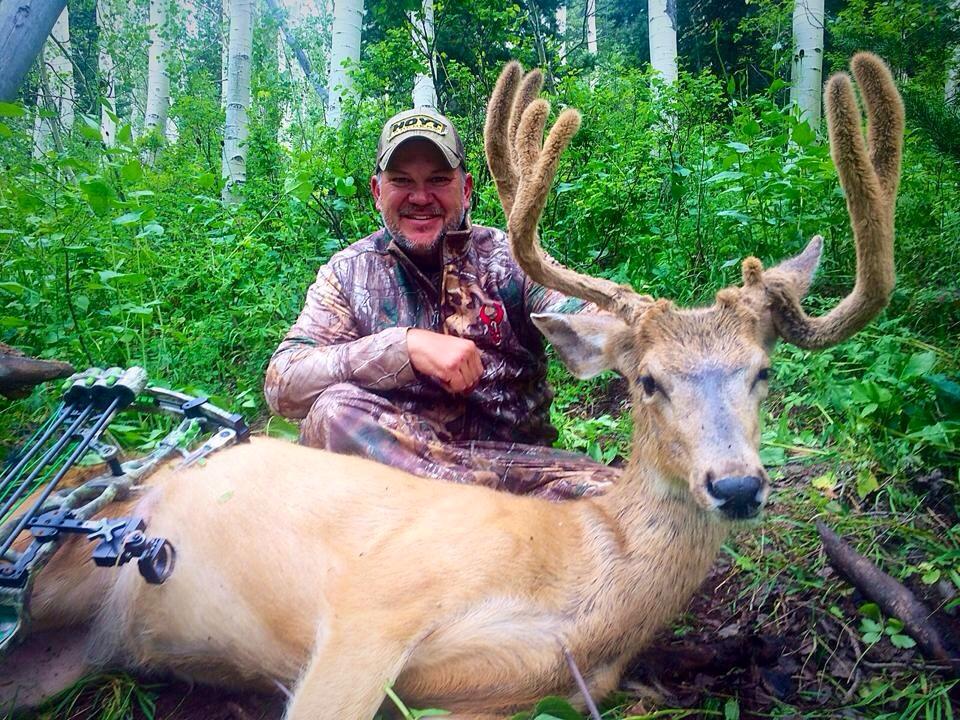 This Unique buck was arrowed by the author in the central Utah mountains while feeding on Dandelions.  Marc noticed deer feeding in the exact same spot two days in a row, on day three he made his move!

With a favorable wind, unsuspecting bucks have fed right into bow range while they gorged themselves on the succulent leaves of Bitterbrush.

Lower on the mountain, The Oaks

When the southwest states of Arizona and New Mexico have a good acorn mast you’re sure to find a plethora of game feeding in the oaks, including black bear, wild turkey

When the mature Gambel Oaks are dropping big acorns, the mule deer, wild turkey and black bears wont be far.

and mule deer.  No food source that I know of can concentrate mule deer like acorns in September.  When the Gambel oaks start dropping the big acorns that are as big around as your thumb, the bowhunting can be at times, nothing short of magical.  I’ve seen groups of big bucks bed together under the oaks and they will literally get up and walk over and eat acorns singularly as they drop from the trees.  Acorns provide a source of fat that no other food can for the mule deer and in years with a high acorn mast the deer mortality rate is substantially lower; acorns are like deer super food.  When the acorns are dropping deer will hardly eat anything else.  Because of this, with a little pre-season scouting you can determine which trees have large concentrations of acorns making a ground blind or tree stand a very effective way to take a good buck.  Just a couple of seasons ago while bowhunting in Arizona I found that the area I was hunting had an unusually high acorn mast.  I could not find any deer in the usual areas that I normally hunted there.  I talked to a couple of locals and they keyed me in on the oaks.  They said, “go find the big acorns and you’ll find the big bucks!”  A couple of hours later I found myself stalking a great buck as he fed on the acorns.   I was able to slip into bow range from behind him, get my Hoyt bent back and sent a perfect arrow through him.   He was the last deer in a group of about 20! 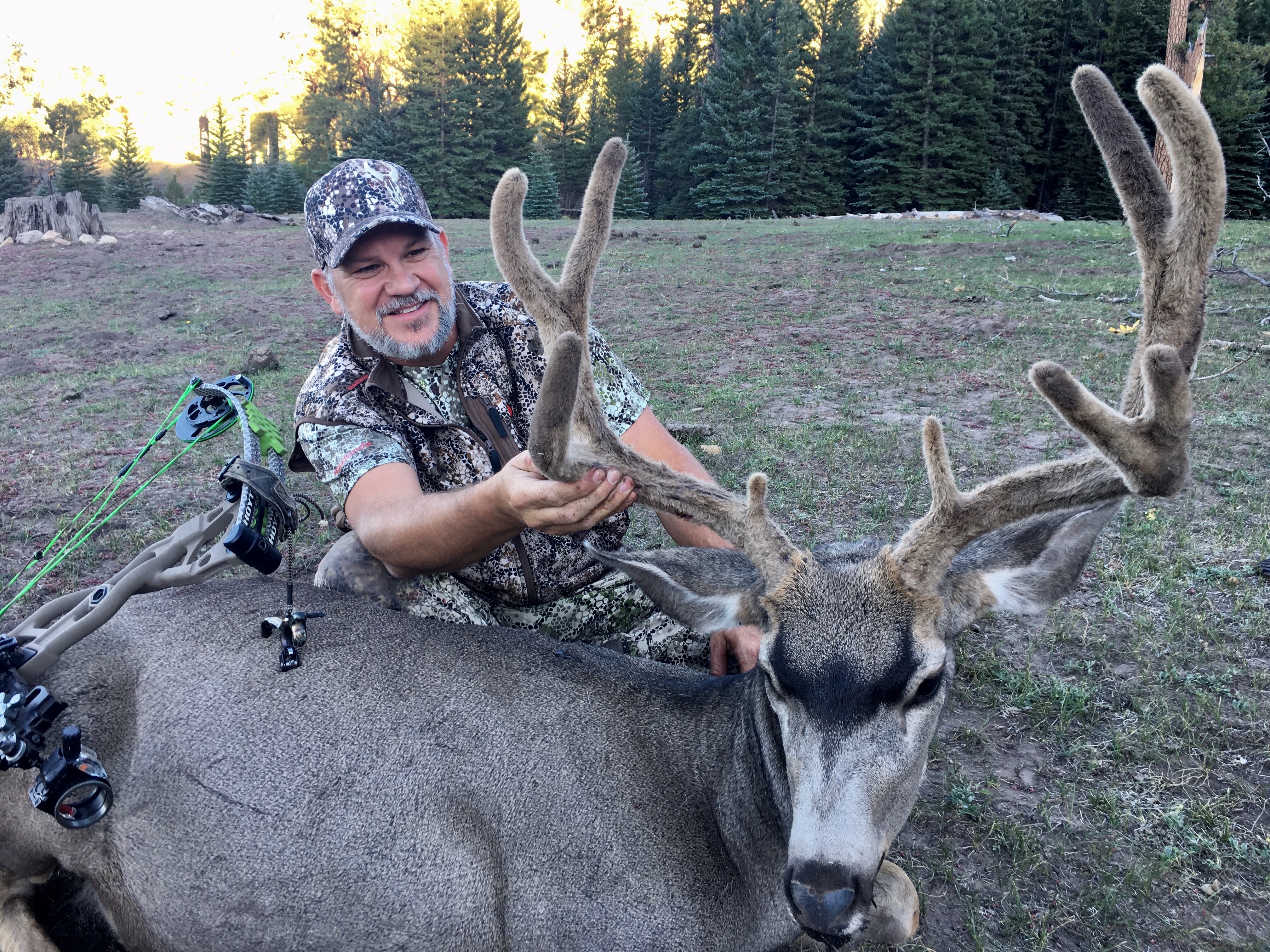 After using intel gathered from locals in Arizona, Marc keyed in on an area of big mature oak trees that were loaded with big fat acorns.  He found this buck feeding there and put his Hoyt bow to work!

Regardless of the state or the elevation that you choose to hunt, if you are headed out west to bowhunt mule deer in the early season, food is the key to your success.  With the help of google just type in “what do mule deer eat?”  There you will find all kinds of great information with pictures to identify all the plants and food sources mule deer utilize.  Something I always do is investigate.  When I see big bucks feeding, whether I get an arrow into one or not, as soon as they vacate the area I go snoop around and look at what they were eating.  You’ll be able to identify mule deer food by the freshly nipped buds, twigs, stems and even busted acorn shells.  I like to identify food sources and log it for later intel.  By spending time doing your own research, you’ll have a better understanding of your quarry, increasing your odds for success.  I also key in on specific tracks, they tell a story of their own but that’s a story for another day!

I’ll see you on the mountain or down the trail